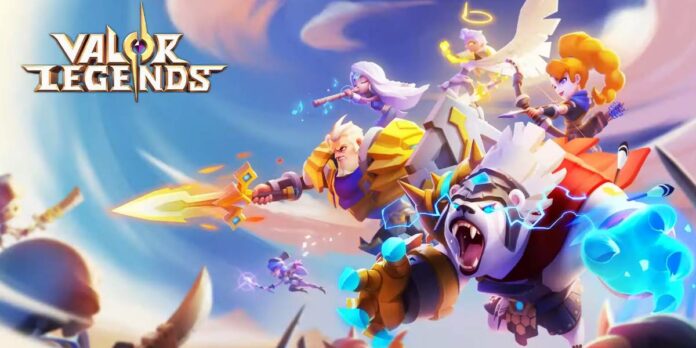 Welcome to Valor Legends: Eternity, a medieval fantasy adventure that blends idle RPG mechanics with the popular “auto-chess” genre. Players are tasked with venturing through a wondrous fantasy landscape full of monsters to slay and treasures to loot. Despite Valor Legends: Eternity being an idle game, the core of the game play lies within the challenge battles, where the auto-chess section plays out. We’re here to guide you through the experience with our Valor Legends: Eternity strategy guide: tips, cheats, and more!

How to Build a Great Team

When it comes to hero choice, there are several factors you should consider when choosing your team. In general, it’s a good idea to have a balanced composition. You can bring up to five heroes with you into battle, and conveniently enough, there are five different hero classes.

Warriors are your frontline heroes that charge into battle and draw as much fire as possible. They have high health and defense, which makes them perfectly suited for the “tank” role of your team.

Rangers deal consistent damage from afar, using bows and other ranged weapons. Their skills usually consist of strong, single-target attacks, making them adept at taking out high-priority targets. They also get useful utility skills as well, like debuffs and hindrances.

Mages are powerful spell-slingers that use the elements to deal massive area damage to the enemy team. Their auto-attacks aren’t too great, but when their energy is full they’re a force to be reckoned with. They’re quite fragile, so make sure they’re defended by a Warrior.

Assassins are nimble fighters that always target the enemy team’s backline, making them perfect for taking out important targets, like Priests or Mages. They’re extremely delicate and cannot sustain too much damage, but they make up for it with huge burst damage!

Priests are stalwart supporters that focus on healing the team and buffing them, increasing their natural abilities. The majority of Priests have nothing but support skills, so while they don’t deal too much damage, they keep the team healthy!

It’s always a safe bet to go with a team comprised of every single class-type, especially if you’re new to the game. You can always build your party differently if you’re going for a specific strategy, but if all else fails, a balanced team is a good choice.

There are five factions in the game: Legion, Forest, Undead, Light, and Shadow. Legion beats Forest, Forest beats Undead, and Undead beats Legion. Light and Shadow beat each other out. If you’re having trouble against a specific team, using the advantageous faction can give you enough power to triumph over the enemy.

In addition to the Faction Advantage, you also get a bonus for using multiple heroes from the same faction called Faction Aura. The Faction Aura’s strength increases with the number of same-faction heroes you have on the team. Light and Shadow heroes have their own individual bonuses.

Stacking heroes of the same faction is always a good thing to do, so always try for it if your hero selection enables you to do so.

Related | What is the Chicken in Valor Legends: Eternity and How to Get it

In some cases, the difference between a winning and losing strategy can come down to the position of a single hero. Strategic positioning is very important in auto-chess games, so knowing which heroes go can make or break your strategy.

In general, all classes except for Assassins will target the closest enemy. During the pre-battle positioning, you can tell who is targeting who by watching for the red and blue lines that come from each unit. When a hero is targeted by multiple enemies, an icon will show up on them with a number equal to the amount of enemies targeting them.

You’ll want to position Warriors upfront so that they get the attention of the enemy team. Be careful, as even the mightiest Warriors will crumble if they’re targeted by the entire enemy team. If you’ve got a second Warrior, or any other hero with decent defense, it may be beneficial to split the damage between them so that your sole Warrior doesn’t get nuked right off the bat.

Your Mages, Priests, and Rangers should target the enemy equivalents of themselves. Taking out the enemy team’s damage dealers is the quickest way to reduce the damage absorbed by your Warrior.

If you’re having trouble getting through a stage, try changing your formation around and see how it plays out. You never know what a small change is capable of doing!

Like many idle RPGs, your success in Valor Legends: Eternity depends solely on your diligence when it comes to resource farming. To clear more of the game’s content, you need to get stronger units, and to get stronger units you need to clear the farming content. This is a game play loop that should be familiar to you if you’re a fan of this genre.

First and foremost, try to complete as many of your Daily Tasks as possible. Each Daily Task is worth Daily Points, which let you open up chests once you have enough. You only need 100 Daily Points to get all the chests in a day, and these will reward you with:

All of these items are helpful when upgrading your heroes, but the biggest thing is the Eternal Summoner’s Book. You’ll need to construct a team of 5-star heroes as soon as possible, and you’re going to need all the help you can get summoning more heroes.

Next up are Weekly Tasks. These tasks are basically expanded versions of the Daily Tasks, hence why they give you until the end of the week to complete them. Completing enough tasks to get the 100 Weekly Points chest rewards you with:

Once you’re done with the Weekly Tasks, the Mysterious Realms challenges are next. The Mysterious Realms are battle zones that offer a specific reward, and you can only play each zone twice a day. Make sure to use up your plays before the day is over to get all the rewards. You can get rewards like lots of gold, equipment, Energy Essence, hero fragments, and more.

Your first major plan of action in Valor Legends: Eternity should be to get a full team of 5-star heroes. It is possible to awaken heroes and increase their rarity, but you don’t really need to waste your time doing it for low rarity heroes.

If you’re not having luck with the Summon Circle, make sure that you’re working towards completing the current events. Many of the events (Soul of War Training, Hero Summon, Bounty Offer Bonus, Starter Gift) offer 5-star heroes, fragments, and Eternal Summoner’s Books. Eventually you’ll be able to construct a team full of 5-star heroes.

Now that you’ve got a good grasp on the battle mechanics and a full team of 5-star heroes, it’s time to go through the campaign. Your next major goal is to clear as much of the main story as you can, as there are many functions that are locked behind main story progress.

Keep challenging through the stages as fast as you can, and don’t worry if you’re defeated, as there is no energy mechanic to worry about it. If your heroes are too weak, level them up, evolve them, enhance their gear, and awaken if possible.

Don’t worry too much about wasting resources. All heroes can be rolled back, which resets them back to level 1 and refunds all the Energy Essence, Evolution Beads, and gold you used to power them up. This process is free for low rarity units, and a small gem fee for 5-star and up heroes.

To recap, your main priority should be clearing as much of the main story as possible. If you hit a stage that is too hard, make sure to clear your tasks, clear the Mysterious Realms for resources, and then power up your heroes. Don’t forget to claim your rewards from the events!

And that concludes our guide on Valor Legends: Eternity. If you’ve got any other tips or tricks to share, let us know in the comments below!