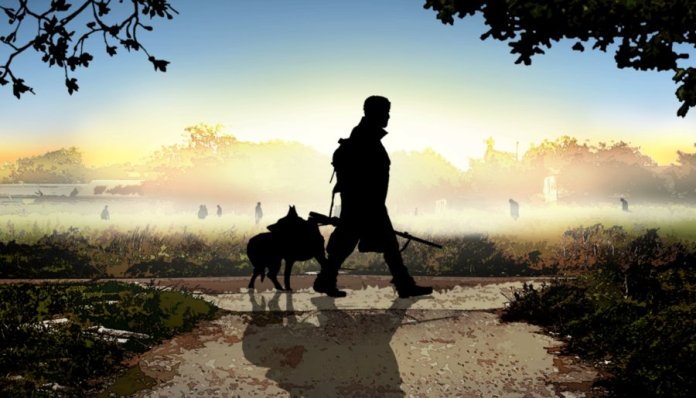 A man, his dog and the zombie horde. Sounds a bit like I Am Legend, but it’s actually Trial by Survival, a roguelike(-like) approach to the zombie genre. Survival at its finest, survival of the fittest and everything for free, but with the annoying in-app purchases. Let’s see if there’s any meat left on the rotting corpse of Trial by Survival!

The story’s pretty simple: you are part of a community of survivors and are suspected for a crime you might or might not have committed. Either way, you are sentenced to a “Trial by Survival” which means that you have to survive the zombie-infected inferno for 14 days all alone. And this is the real challenge!

Gameplay-wise, Trial by Survival is a top down twin stick action game that starts out on a pretty low pace and builds up gradually until you get overwhelmed and realize that it’s pretty tough to do it without spending some real cash on the game. That’s why we all hate the freemium model anyway and this game gives us no reason to change our minds. Which is unfortunate because its premise and style are pretty nice. 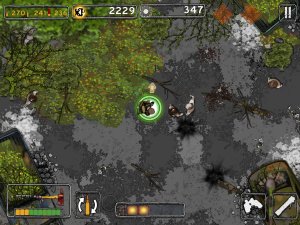 Basically, you will spend each of your 14 days exploring a new area or scavenging the one you are located in. Your goal is to collect as many supplies and goodies as possible while keeping your brains intact and the zombies lobotomized at all times. You’ll start with some crappy melee weapons which you’ll probably use for most of the game anyway because the weapons are really expensive and you’ll have an armor that does not regenerate automatically and you have to spend your already limited resources on it. We could say that this is to make the game feel more realistic and properly show the lack of resources in a post-apocalyptic world, but we could also say that it’s the developers trying to drive you crazy and have you spend some real cash to get better weapons and have a chance at survival.

Because death is permanent, all the skills and weapons you have unlocked are lost when you die and the same happens with your resources. You have to start all over again and that’s it. This is why I dared to say that Trial by Survival is a roguelike, but the truth is that it doesn’t really have the complexity of roguelikes and despite an interesting and thrilling premise, it’s not as entertaining as it could be because progression is so limited. Personally, I made it all the way to day 9 before even affording a revolver and the only reason I wanted to get it was to put a bullet through my head and finish my misery. Unfortunately, I couldn’t do it. Fortunately, the zombie horde helped.

There are some positives in this game, but I clearly doubt that a twin stick shooter can go well hand in hand with the survival element and not the “run in circles shooting madly around” type of gameplay. At least in this case it doesn’t work that well and the experience is fun at start but soon becomes frustrating and way too repetitive. So not really what I like the most about my games.