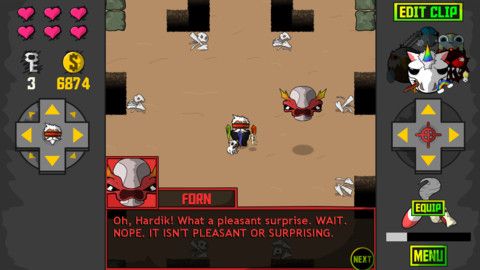 When we’re talking about an iOS game that handles exploration and combat similar to the original Legend of Zelda, I am definitely interested. This is the case of TowelFight 2: The Monocle of Destiny, a pretty crazy iPhone and iPad game from Butterscotch Shenanigans who probably lost some marbles right before creating this game.

And losing marbles is not really a problem in the mobile gaming world, as the result is an absurdly funny one. In TowelFight 2: The Monocle of Destiny, for example, you play as Hardik, a guy who wears his monocle proudly and loves his dog almost as much as he loves the monocle itself. When they’re both taken to a world where gods fight one against the other and Hardik is tasked with destroying one of the gods, just after receiving the super power of shooting frogs and eagles and whatnot from his monocle, things get a lot more interesting.

And as crazy the story of Hardik and TowelFight 2: The Monocle of Destiny might sound, it is extremely fun, with humor all over the place, with a tongue in cheek attitude and with a ton of references to pop culture facts and memes. So the writing is insane!

The gameplay doesn’t really fail either, even though games like TowelFight 2: The Monocle of Destiny are not my favorite piece of the pie. As I said, both exploration and combat are similar to the original Zelda games, meaning that combat takes place in a single screen than, once cleared of enemies opens new gates and gives you up to four possible routes to follow.

The combat itself against exploding hedgehogs, mad squirrels and so on, is intense and requires quite some skill from the gamer: you control the main character using a virtual joystick for movement, while the shooting is controlled by a different virtual joystick. The good thing is that you can move left and shoot right and so on. The bad thing, for an older dude like me whose eye to hand coordination is not what it used to be (blame alcohol and sleepless night!), things are a bit complicated. But I am sure you younger people will find it a piece of cake!

While TowelFight 2: The Monocle of Destiny doesn’t really fail at anything, on the contrary, it really is a hit or miss depending on the gamer’s preference. For some strange reason, even though I had my mind telling me that this game is uber cool and enjoyable, I couldn’t really love it. Heck, I barely liked it! I don’t know if it was the retro graphics that made me go eww, the sometimes confusing battles where enemies coming from everywhere, shooting at all directions made it impossible to play or I was simply not in the mood for such a game, but I didn’t really like it that much.

On the other hand, you might like TowelFight 2: The Monocle of Destiny quite a lot, especially if you’re into zany stories, retro graphics and, of course, monocles. It is a bit random, you will die a lot and you won’t really have control on what you’ll shoot, despite having more options, but it is clearly enjoyable for the right crowd.