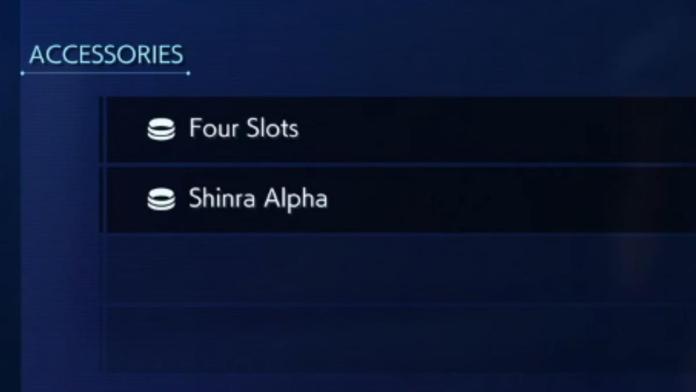 There are lots of accessories to pick from! There are accessories that boost your HP, grant a permanent buff in battle, make it easier to farm Gil and items from monsters, and even break stat caps. Here are some of the best accessories in the whole game!

The Genji Armor breaks the HP limit and sets it to 99,999, grants you permanent Endure and Regen buffs. It is obtained by completing all DMW Limit Breaks and Verges.

The Genji Armor makes Zack incredibly tanky, as not only does it break the HP limit, it also gives you permanent Regen and Endure. Endure makes it so that you cannot be staggered in combat, so you’ll be able to dodge everything with relative ease.

The only reason it’s last in this list is that completing all the DMW Limit Breaks is completely up to chance, so unlocking this thing is a huge pain in the butt.

The Genji Helm grants you infinite MP and AP, and it gives you automatic Libra effects, allowing you to view enemies’ info. It can be purchased from the Network Shop Shade for 1,000,000 Gil.

The Genji Helm needs no introduction, as it basically allows you to blow everything in a battle as much as you want, without any fear of running out of resources. With Libra, you can also easily see enemy weaknesses, allowing you to go all-out with your abilities and magic!

The Genji Shield grants you permanent Barrier and MBarrier, absorbs all elemental attacks, and nullifies all status ailments. It is obtained from the Magic Pot found in mission 7-6-6.

The Genji Shield, coupled with the Genji Armor, makes Zack essentially invincible, since you’ll be immune to status ailments, elemental damage, and you’ll have Barrier on. It’s the ultimate combo to become an unstoppable force!

The Genji Gloves break the damage limit and lets you deal up to a maximum of 99,999 damage, and all attacks you make are automatic critical hits. It is obtained by completing mission 9-6-4.

Arguably the strongest Genji item, the Genji Gloves turn Zack into a killing machine. With the damage limit broken and all your attacks become critical, you can absolutely shred through anything.

The Divine Slayer breaks all limits, auto casts Libra, increases your HP, MP, AP by 100%, and all main stats by 50. It is obtained by completing mission 9-6-6.

Imagine if you took mini-versions of all the Genji items and combined them into one—you would get the Divine Slayer. Though you don’t get any of the fun little buffs like the Genji pieces, the stat Limit Breaks and the huge attribute bonuses make it still extremely powerful.

Essentially, it’s every single accessory on this listed combined into one super accessory, and as such, it’s considered to be the best accessory in the entire game.

The downside? The Heike Soul inflicts Curse that cannot be dispelled, which disables your DMW from spinning. The curse will remain active until you unequip the Heike Soul.

However, by this point in the game, you don’t even really need the DMW, as you need to clear every single mission in the game to earn the Heike Soul. It’s just a bragging rights reward at this point, but it’s still fun to absolutely decimate everything in the game with it equipped.

Those are the top 6 best accessories in Crisis Core -Final Fantasy 7- Reunion. Think another accessory should be on this list? Let us know in the comments below!