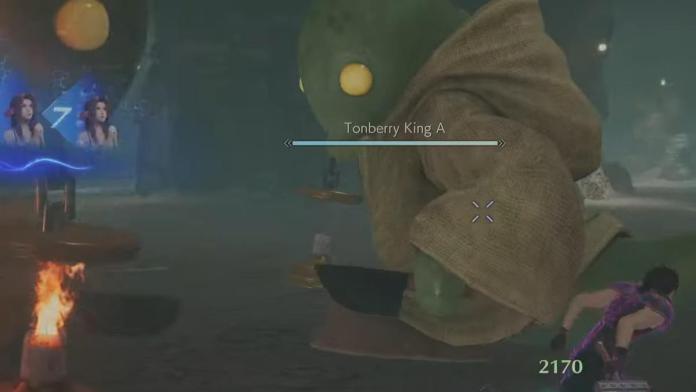 The Final Fantasy series has its own share of reoccurring monsters and characters, and the iconic knife-wielding Tonberries are one of the most popular. In one of the final missions of the game, Zack must face off against a pair of Tonberry Kings, so today, we’ll show you how to beat Tonberry King enemies in our Crisis Core -Final Fantasy 7- Reunion guide!

In mission 9-4-5, one of the fixed encounters is against two Tonberry Kings, which is the ultimate form of the Tonberry. One Tonberry King is highly dangerous, but two!? You’ll have to deal with lots of incoming damage for this.

First off, we highly recommend getting and equipping the Adaman Bangle for this fight, which can be obtained from missions 7-3-6, 9-2-4, and 9-5-4. The Adaman Bangle breaks Zack’s HP limit, allowing it to go up to 99,999 HP.

Alternatively, the Genji Armor works as well, but you’ll need to complete all DMW Limit Break and Verges, which might take some time.

The reason you want lots of HP is that the Tonberry Kings hurt a LOT, and because there’s two of them, it’s very rare to dodge all their attacks. You’ll also be able to take advantage of Costly Punch, which we’ll explain more later.

Tonberry King’s main attack is Kitchen Knife. Depending on your distance from it, Tonberry King will either vanish and quickly teleport next to you, or slowly waddle up to you and attempt to stab you. This attack comes out surprisingly fast, so don’t get caught off guard!

Their secondary attack is Everyone’s Rancor, which is ranged magic attack. Tonberry King shakes its lantern, and Zack kind of just… explodes. We’re not sure if this move is avoidable, or if it just has a short dodge window. Keep yourself topped off with Cure magic, and use a Phoenix Down for safety.

Lastly, Tonberry King’s Limit Break is Wash Tub and Kettle, both of which are essentially the same thing. Zack will stand around like a doofus, then suddenly an object of varying size will land on his head.

This Limit Break is completely random, as it can deal as low as 10 damage or as high as 50,000 damage! Additionally, it may stun Zack, so keep that in mind.

If you’re unlucky, you might get instantly KO’d by this Limit Break, so make sure to interrupt it by dealing heavy damage to Tonberry King when the Ability Power gauge shows up.

If you heeded our warning about having lots of HP for this fight, then you might be able to survive Wash Tub/Kettle if you’re topped off.

On top of that, remember that we mentioned Costly Punch? This move sacrifices a small portion of Zack’s HP to unleash an incredibly powerful blow that ignores defense, so as long as your HP isn’t in the break state. Use this to deal massive damage and drain a huge amount of Tonberry King’s Ability Power.

It’s best to focus on whittling down one Tonberry King, as it’ll give you more breathing space to work with. You should only stop to attack the other Tonberry King if it’s preparing Wash Tub or Kettle.

Once you take down one of the Tonberry Kings, the fight becomes much more managable. It’s just a matter of keeping yourself topped off to mitigate the heavy damage and interrupting Tonberry King’s Limit Break.

That concludes our guide on how to beat Tonberry King enemies in Crisis Core -Final Fantasy 7- Reunion. If you have any other helpful tips to share about these enemies, let us know in the comments below!