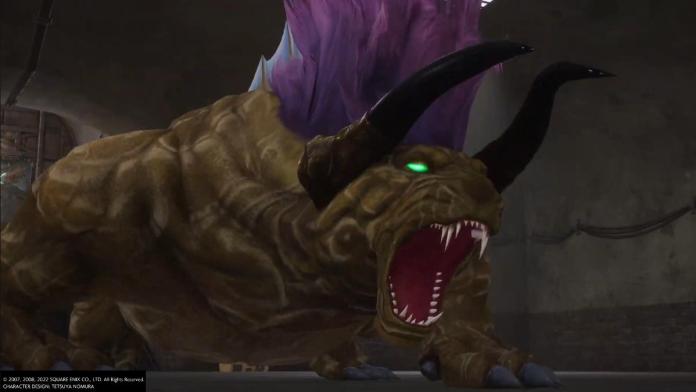 During the final stretch of Crisis Core -Final Fantasy 7- Reunion, Zack will need to work his way though the Cage of Binding. As the name implies, there are many cages housed here, and they all contain powerful monsters. One such monster is the mighty Behemoth King, who can easily stomp Zack if he’s not prepared. Today, we’ll show you how to beat Behemoth King in Crisis Core -Final Fantasy 7- Reunion.

Right off the bat, the most alarming thing you’ll notice is that the Behemoth King will cast Regen on itself. Since the Behemoth King has an astronomical amount of health and Regen heals based on percentage, the Regen effect must be dealt with immediately.

The best way to get rid of Behemoth King’s Regen effect is to use Dispel, so equip the Materia if you haven’t already. Alternatively, you can also use Dispel Blade if you’d rather save your MP and use your AP.

You can try to power through the Regen if it comes down to it. However, unless Zack is over leveled like crazy, there’s a good chance the Regen will out heal your damage, making the fight an uphill battle, if not outright impossible.

Now, let’s engage the darn thing. The Behemoth King has two main attacks: Heave and Gyro Tail, both of which have interesting properties that aren’t readily apparent.

Heave makes the Behemoth King charge and headbutt you, dealing damage equal to a quarter of your current HP. This means that, even if you’re hit by Heave with 1 HP left, it won’t kill you. Though, this doesn’t make Heave any less dangerous, since it deals percentage damage.

Gyro Tail makes Behemoth King spin around quickly, whipping its tail in front. This attack ignores your VIT stat, which makes it hurt a lot no matter how defensive you’ve built Zack.

Behemoth King likes to use both of these attacks when you’re attacking it from the front and sides, so try to stay near its rear. You should be doing this anyway for the guaranteed critical hits.

But beware, as the Behemoth King has one more unnamed attack that it uses when you’re positioned behind—it will swipe its tail back and forth quickly in an attempt to swat you away. Make sure not to commit to a full attack string, so you can block or dodge.

Very rarely, the Behemoth King will cast Quake on you. This is probably the easiest attack to dodge, as you simply need to pull back for a bit.

Last but definitely not least, we have to deal with Comet, Behemoth King’s Limit Break. Comet is an unavoidable magic damage attack, and it can easily deal over 5,000 damage! Comet will kill you very quickly if you’re not prepared for it.

You’ll need to mitigate as much damage as possible, so cast MBarrier or Wall to protect yourself. As soon as you see Behemoth King’s Ability Power meter appear, immediately deal as much damage as you can to reduce Comet’s power. Every bit helps!

If you’re having trouble surviving through Comet, make sure to pop a Phoenix Down before it happens so that you can auto-revive. In fact, having Raise active throughout the fight is good insurance, in case something goes wrong.

Aside from that, it’s not particularly weak to any of the elements, and it’s immune to all status effects, so just use your favorite abilities and magic. Just beware of abilities that have long animations, as you don’t want to be caught in the middle of one.

That concludes our guide on how to beat Behemoth King in Crisis Core -Final Fantasy 7- Reunion. If you have any other vital tips or tricks, let us know in the comments below!