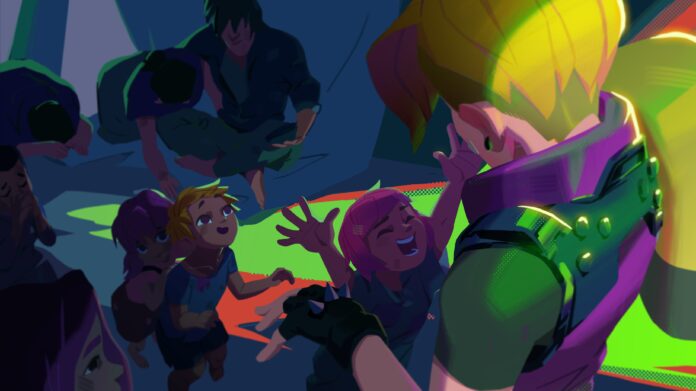 T3 Arena, from XD Inc., is one of our favorite mobile shooters. Partly that’s down to the range of modes, which see you doing everything from taking on online opponents in short, sharp 3v3 team deathmatch rounds to defending crystals against attacks.

Whether you’re a team player, a lone wolf, or the kind of person who likes to take their frustrations out on AI-controlled bots, there’s a place for you in T3 Arena’s sci-fi universe.

Another reason we’re currently smitten with T3 Arena is the way it looks. XD’s shooter is slickly presented, with a colorful, vibrant, futuristic world full of clever touches and imaginative details.

But the thing we like most about T3 Arena is its cast of 17 heroes.

Each hero in T3 Arena has its own skills and weapons. They all perform different roles in battle, too, ranging from support to assault. The only way to truly dominate the servers is to collect all of these heroes and, eventually, upgrade them as far as you can. But everybody has favorites, and these are our top 5.

True to her name, Gloria is a glorious warrior. Powered by a spirit of adventure, Gloria rocks two weapons: the MD-2 Double-Barrelled Shotgun, her main, and the ZMR Assault Rifle.

You can switch between them at will thanks to Gloria’s active skill. Her passive skill, meanwhile, is dashing. This gives her added movement speed between volleys of gunfire.

Gloria has two ultimate skills. The Quicksand Bomb is a bomb that works on a timer. The beauty of the Quicksand Bomb is that it slows down enemies who happen to walk over it prior to exploding, thus increasing the chance of them remaining in the blast radius.

The Amplifier Module amplifies the damage caused by her teammates’ weapons, giving the whole team a boost.

Gloria is a fantastic all-rounder, with 1000 Shield and 3000 HP, good mobility, and an ability to carry out ranged attacks with her assault rifle as well as close-range attacks with her shotgun.

Labula is an alien ambassador that looks a lot less frightening than it is. Labula’s main weapon is the Alien gun, which fires deadly spores that travel quickly and explode, causing AOE damage.

Labula’s active skill is Bouncy Spores. These ingenious spores bounce across the battlefield, protecting any allies that they hit and damaging any enemies. The character’s passive skill, meanwhile, is Charging Barrier. This converts damage into shield power.

Then there are Labula’s ultimate skills. Coral Blast creates a turret-like companion that shoots at whatever Labula is shooting, while La La Pop! is an energy blast that turns its victims into a tiny Labula for four seconds.

Labula has 2500 shield and can cause huge amounts of damage at any range, making it an ideal damage-dealing character.

Victor is another absolute beast. Armed with a Triple-Load Shotgun, Victor causes a lot of damage at close range, while his charge ability allows him to make trouble from further back.

Tackle Charge is Victor’s active skill. It sees him barrelling forward and stunning all of the enemies that he collides with. His passive skill, meanwhile, is Speed Loading. This enables Victor to instantly reload his weapon – a useful ability in the heat of battle.

Victor’s first ultimate skill is something called MGP. This is a physical attack in which Victor jumps into the air and lands with a crash, inflicting damage and knockback effects on all enemies in the vicinity.

His second is Ramming Speed, another charge attack that causes damage and knockback effects.

Cristina is a devastatingly powerful character whose main weapon is a grenade launcher that fires bouncy grenades, causing AOE damage.

Her active skill is a volley of three Sticky Bombs. These stick to whatever they land on, whether that be the ground or the top of a hapless enemy’s head. Then they explode.

Cristina’s passive skill is Incendiary Casting, which causes her grenades to burn rather than explode, inflicting a different, arguably worse kind of horror on her enemies.

In terms of ultimate skills, Cristina has Cluster Grenade and Trap Blossom. The former is a powerful grenade that scatters ten mines across the battlefield, while the latter takes the form of 12 traps that incapacitate their targets for three seconds.

Boasting arguably the coolest backstory, Ossas is a hitman wearing a badass trenchcoat with purple accents. His head appears to be encased in a metal mask with an unsettling red light where the eyes should be.

Ossas wields a sniper rifle. A sniper rifle with a difference. By holding down on the fire button you can charge his shots for extra damage.

Active skill-wise, Ossas is rocking a deadly smokescreen called Shadowfall. This not only blocks enemies’ view, but it also inflicts damage on all of the enemies caught within its choking pall.

Ossas’s passive skill is Whispers in the Night, which allows him to detect nearby enemies. It’s like a legalized wallhack.

His ultimate, meanwhile, is called Dark Surge. This takes the form of an energy blast that affects multiple enemies at once. Better still, their pain is converted into healing.

These are our five favorite characters in T3 Arena. What are yours? Check out the game by clicking here.