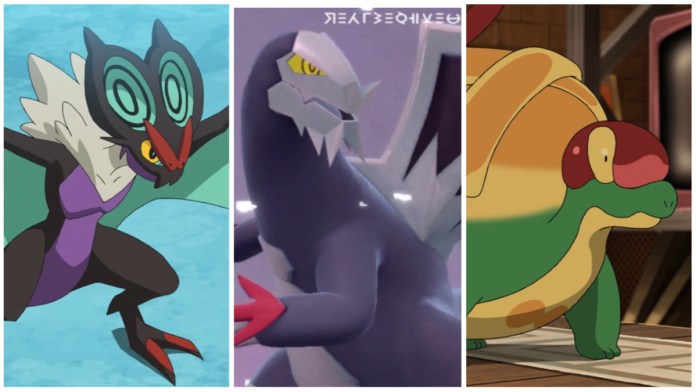 Dragon Pokemon are some of the most wonderful residents of the Pokemon world. From being gracious fliers to fire breathing machines of power, it’s hard to compare them. Dragon types are in their own category of fantastic and are truly appreciated by those who love them. Every Dragon Pokemon is good, but only a few can be truly great. These are the top 10 Dragon Pokemon in Scarlet and Violet.

Altaria may look more like a fluffy cloud than a scaly predator, but it is indeed a Dragon and Flying type. They have a very high base special defense of 105 and can learn a wide variety of attacks such as Draco Meteor, Ice Beam, and Fire Spin. It does not take any damage from Ground type attacks and takes less damage from common types like Fire and Grass, making it really useful.

RELATED: Top 10 Pokemon To Have On Your Team in Scarlet and Violet

While they don’t always have the happiest backstories, any Pokemon that has Ghost type added to it is automatically amazing because it’s that strong of an element. Dragapult is no exception, being a Ghost and Dragon type. Thanks to that combination, it won’t get scratched at all by Fighting and Normal type Pokemon. They are also very fast Pokemon, having a base speed of 142, allowing them to easily evade attacks.

Goodra isn’t a Pokemon that you’d want to hug all the time, but its strange body does come in handy. They are purely a Dragon type but can use a lot of Water moves enough that you can treat it as such. The benefit is that they won’t take damage from the usual weaknesses of Water types. Goodra’s form basically makes it so that attacks slide off it and this shows in its potential abilities. One of the best is Hydration, where any status it has will heal if it rains. All you have to do is teach Goodra Rain Dance and then you can use it anytime in a battle.

Cyclizar is a Pokemon that is new to the franchise, making its official debut in Scarlet and Violet. As a Dragon and Normal type, it will evade damage from Ghost moves. They are just as strong as they are cute, having a base speed of 121. It has no evolutions, so you can train it without worrying about grinding it to a certain point. Cyclizar’s Shed Skin ability allows it to heal itself from problems like Poison and Paralysis.

Hydreigon is worth raising because they come with special assets that other Pokemon do not have. Their ability Levitate allows them to evade Ground type moves such as Earthquake and Dig, as well as Spikes. It is known as the Brutal Pokemon, but with the right patient trainer, it would be anything but that. You can teach them Surf even though they are not a Water type. This advantage allows them to damage Pokemon that they normally wouldn’t.

Noivern is a Flying and Dragon type like Dragonite, but rest assured they are very different. This bat-like dragon uses sound waves from its large ears to deter enemies. If possible, you should get one that has the Infiltrator ability. This move is one of the only ways to block the effects from the move Substitute, where a Pokemon uses a doll to evade damage. Noibat evolves into Noivern at level 48.

Dragalge is one of the most underrated dragons in all of Pokemon because frankly, its appearance is something left to be desired before evolving. At face value, its first form Skrelp looks like a pretty basic Water type Pokemon that gets boxed halfway into a playthrough. However, Skrelp goes from being a Water and Poison to a Dragon and Poison type when it evolves into Dragalge at level 48. This allows it to take less damage from Fairy moves and counter them completely with its Poison based attacks. If you give Skrelp a chance, you will not regret it.

You can evolve Applin into either Appletun or Flapple. Both are the same Grass and Dragon type, but Appletun has better benefits. They are very tanky, coming with a base HP of 110. Defense is important for a Grass type because they have lots of weaknesses. It also has a base special attack of 100. Make sure you always have Appletun holding a Berry, as their abilities like Ripen and Glutton work best when done with berries.

Baxcalibur might be part Ice type, but it will take more than Fire to bring them down. With a base HP of 115 and attack of 145, they are one of the strongest dragons to date and likely have the capability to take down certain legendaries. Ice Pokemon normally will be destroyed by Fire types, but thanks to Baxcalibur’s Thermal Exchange ability, it will become stronger when it is damaged by Fire attacks. This ability also makes them completely immune to the Burn status.

You cannot go wrong picking Dragonite to fill the spot of DPS in your party. They hit hard, can learn some amazing moves, and never lose their utility. Some Pokemon don’t have that long-term durability and even when they level up, it’s obvious they aren’t meant for high difficulty battles. Dragonite is the opposite of this, as its power continues to grow over time.

Whether they breathe fire, or ice or look like cloud birds, there’s no doubt that variety is the spice of life when it comes to Dragon Pokemon. No matter what the context of their power is, each one is perfect its in own way. There are tons of them in Pokemon Scarlet and Violet, so check out the game today!