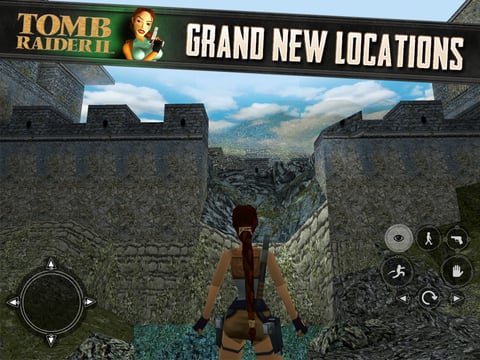 Last year, Square Enix surprised fans of the Tomb Raider series all over the world by releasing the original game of the series on the App Store. While touch controls aren’t exactly the best ones for this type of game, the Tomb Raider iOS port was more than a decent one.

Those who have enjoyed the iOS port of the first game of the series will be happy to know that Tomb Raider II is now available for download on the App Store.

In Tomb Raider II players will take once again the role of Lara Croft, as she travels all over the world in search of the Dagger of Xian. Gameplay wise, Tomb Raider II is way more varied than the first one, featuring more enemy types, new vehicles, new weapons and much more.

Tomb Raider II iOS also comes with The Golden Mask expansion, which includes four new bonus levels and a new story unrelated to the rest of the series. If you have loved the main levels of Tomb Raider II, there’s a good chance you will love the four extra ones.

Tomb Raider II is now available for purchase on the App Store for only $1.99. Controls may be a bit iffy but this shouldn’t stop any fans of the series from purchasing the game, as Tomb Raider II is a really high quality title that all proper video games enthusiasts should experience at least once in their lives.