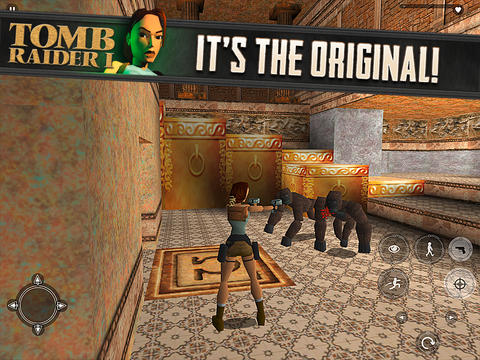 The Tomb Raider series has managed to come back into the spotlight with the latest console and PC game developed by Crystal Dynamics after a few years of not too good games.

Despite the up and downs, however, there’s no denying that the first games of the series released on the first PlayStation console are some of the most unique third person adventure game ever created, games that have influenced countless other games.

If you’re a nostalgic gamer like me or someone who has just started gaming, you may want to take a look at the iOS port of the first Tomb Raider game.

The Tomb Raider iOS port includes all the contents of the original game as well as all the gameplay mechanics. The only different feature found in the iOS port are controls using the touch screen features of the iOS devices.

Aside from this, the game plays exactly like it did on PlayStation. Lara Croft will be traveling around the world, exploring ruins and facing  some great dangers. The infamous T-Rex sequences is still as powerful as it was back in the day so make sure to not miss the game if you never had the pleasure to try it.

Tomb Raider is now available for purchase on the App Store for only $0.99. The game can be played on iPhone, iPad and iPod Touch.