Home Game Guides The Strongest Weapon in Terraria, and How to Get It 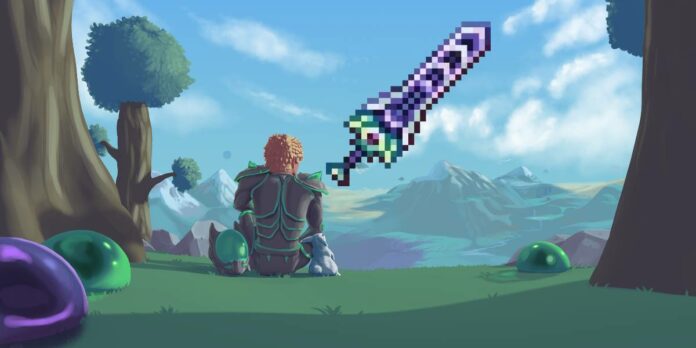 Terraria has a wide variety of weapons that are at your disposal, from guns, magical rods, swords, and more! There’s a weapon for everyone, but you may be wondering what the ultimate weapon is in the entire game. Look no further, as we’re about to spill the beans on the strongest weapon in Terraria and how to get it!

What is the Strongest Weapon in Terraria?

There are many powerful endgame weapons in Terraria, but none come close to the absolute destructive power of the Zenith, a storm of blades comprised of some of the strongest swords in the game.

The Zenith is an autoswinging melee weapon that unleashes a supersonic flurry of slashes. The component swords fly around in a quick circle, shredding anything that gets caught in it. The swing radius covers about a width of 20 blocks, so you can cut up a large target area. The attack whirlwind also passes through any kind of block, so not even walls can save your enemies!

The Zenith’s base stats are 190 melee damage, 6.5 knockback (strong), and a 14% critical hit chance. Zenith is particularly strong against multi-part bosses, as each individual part is hit multiple times by several swords!

Related | Terraria: How to get a Moon Stone

How to Get the Zenith

The Zenith cannot be acquired until you’ve done just about everything in the game, so it can be considered the ultimate weapon. As such, you’ll need to defeat the Moon Lord multiple times in order to obtain it. To craft the Zenith, you need several swords.

Both the Meowmere and Star Wrath swords have an 11% chance to drop from the Moon Lord. You’ll probably need to defeat the Moon Lord several times before you get both blades, so we recommend making one of the Moon Lord armor sets and weapons to make things easier.

The Influx Waver can only be acquired during the Martian Madness event. After you’ve defeated the Golem in Hardmode, look around near the edges of your world up in the sky near space, and you might see a Martian Probe – it kind of looks like a jelly fish. Once it sees you, it will fly away and start the event.

During the Martian Madness event, you’ll need to fight off waves of alien themed enemies. At about 30% into the event, a mini-boss Martian Saucer will spawn, and it has a 16.67% chance of dropping the Influx Waver.

Craft a Pumpkin Moon Medallion using 30 pumpkins, 5 ectoplasms, and 10 hallowed bars. Use the medallion during the night to start the Pumpkin Moon event. Survive for long enough and the Pumpking will spawn, who has a 1-14% chance of dropping The Horseman’s Blade.

The Seedler is dropped by Plantera with a 11% chance. Remember that multiple Plantera Bulbs will spawn in the underground jungle if you need to refight it.

Related | How to obtain a Trifold Map in Terraria

The Starfury can be randomly found inside Skyware Chests on Floating Islands. Skyware Chests have a 33% chance to have a Starfury within. You can also find Starfury inside Sky Crates, which are fished up from bodies of water high up in the sky.

The Bee Keeper has a 33% chance to drop from the Queen Bee boss found inside the bee hives in the underground jungle.

You’ll begin the game with a Copper Shortsword in your inventory, so no need to worry about this one.

Once you have all components of the Zenith, bring them to a Mythril/Orichalcum Anvil to combine all blades together into the Zenith. At last, the legendary blade is finally yours!

And there you have it: Zenith, the ultimate weapon of Terraria. If you have any other tips or tricks to getting this legendary blade, let us know in the comments below!

The Strongest Weapon in Terraria, and How to Get It