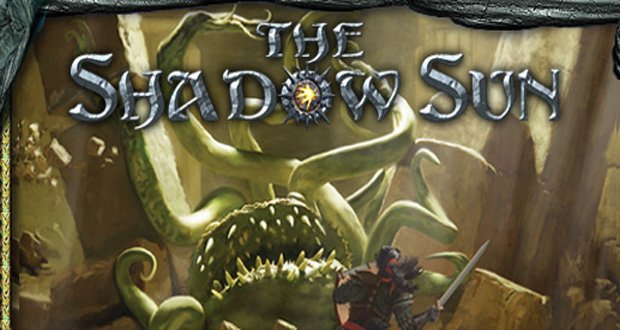 The advantage of being a rusty old gamer – like I am – is that you got the chance to play all the groundbreaking and amazing games that were available during the gaming boom of the 90s. It also means that I was old enough to appreciate the RPG boom at the beginning of the 2000s too, when amazing games like Gothic or Neverwinter Nights were released.

Fast forward more than a decade and we have the present, when 4 inches can make even the most demanding gamer girl happy: the small devices that we own (because that’s what I was talking about, you dirty mind!) are more powerful than the desktop computers of the golden ages of the RPGs. And this means that it was time for The Shadow Sun to launch: a brilliant, captivating and absolutely awesome Western RPG! 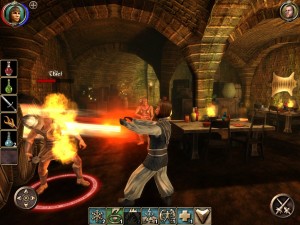 The story is pretty standard: an unknown plague is starting to spread, turning the people into zombie-like creatures, the streets unsafe and our hero a magnet for trouble. Which is a good thing, because there’s non stop action that we want from The Shadow Sun and that’s what we get. Add to that the fact that some diplomats are missing and you have to solve the problem, and you’re ready for your own adventure!

The game was created by Ossian Studios (the people behind Neverwinter Nights 2: Mysteries of Westgate) who have been working on it for quite some time – it was slated for release back in 2010 initially – but all their hard work and delays have paid off and the results are pretty impressive, with top notch graphics and overall an epic adventure that will keep you awake at night, really busy during your toilet breaks and generally glued to your iPad’s screen. Or iPhone, if that’s where you choose to play The Shadow Sun on.

If I were to describe this game using just one word, I would have to say EPIC. The story itself will keep you busy for at least 10 hours, but it’s all the depth, the level of detail, the characters and the story that make the game a perfect whole. The quests that you have to complete have, on many occasions, multiple ways to be solved and interactions are based on the skills you have (or don’t): get extra info or dialog options if you’re super charismatic, persuade enemies to run and avoid combat or simply play as the brainless brute who stabs you with a longsword before you say Hello. 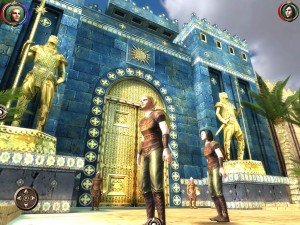 The Shadow Sun is a game of choice – not necessarily a choice for one of the multiple paths in the game, but a game of choice regarding the gameplay. You can completely customize your character to your liking, choosing from multiple skills and attack types, mastering spells and weapon types and choosing armor and shields, then approaching each situation your own way. You also have a few companions to choose from, each with their pros and cons, each with specific instructions that you can set – like turn them into gung ho attackers or support players, healers or simply take them on because they’re ladies and you’re a lonely gamer.

The controls scheme is as good as it gets on an iOS device and I strongly believe that the game is a lot easier to play on an iPad because of the larger screen area. You have slots for special attacks at items that can be easily accessed, while the attack and parry mechanics are smartly optimized to use as few buttons as possible – you basically have just one action button which, once tapped, makes your character attack or makes him block incoming attacks if you touch and hold the same button. When fighting multiple enemies, a simple tap selects the one you will attack so everything is as optimized as possible to make the otherwise crappy touch controls as solid and accurate as possible. And for the best part, the game manages to offer an easy to use, no headaches attached control scheme.

What managed to tickle my pleasure spot the most, though, despite all the obvious positives, was the number of menus and stats and numbers and options that The Shadow Sun has. Being a fan of old school RPGs and a major Football Manager freak, you can imagine that for me seeing tabs and obvious details of depth makes me jump with joy. And The Shadow Sun delivers – the Skills tab only, for example, has 5 major areas, each with 6 possible skills to learn, each upgradable twice. Mmmm… gravy! Now for the icing on the cake, we have a codex for the 17 main characters of the game, a journal for the quests and the so much needed map available at all times. In other words – all the ingredients for a complete game. 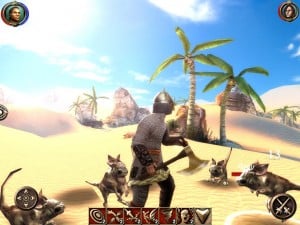 Visually, the game is stunning. For a game that was initially expected to hit the App Store in 2010, you’d expect some pretty crappy graphics, but fortunately The Shadow Sun does not disappoint. The cities are incredibly detailed and even though the developers chose the desert lands as a setting (therefore, they require less “accessories” like trees and plants and lush forests), you will have no reasons to complain. And if you do, just think about the actual epicness – the huge game world, the number of characters and quests and weapons and skills, and you’ll easily get over it.

Overall, The Shadow Sun is exactly as I described it earlier: epic. It has a rich, captivating story, characters with enough background details to make you care about them and enough enemies to keep you busy for a long time. A last word of advice before we leave: save often!