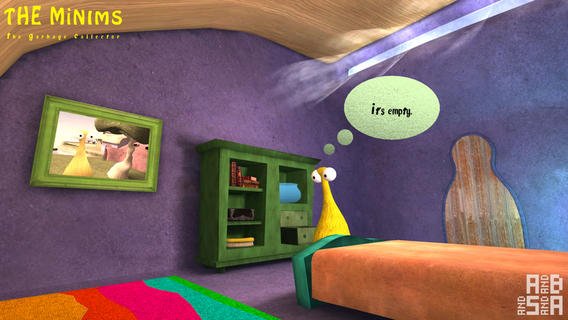 The Minims is an imaginative adventure in the vein of point-and-click games such as Broken Sword, Maniac Mansion and Sam and Max, and is set in a unique world where birds ride around in hot-air balloons, hedges need their morning coffee to wake up and giant flying fish inhabit waste dumps. If this sounds like a place you would like to visit, then read on.

The story begins in a straightforward enough fashion, with the main character Mii, who looks something like a bowling pin with eyes, preparing for a picnic with his best friend U in their homely settlement that towers over a vast desert. The game is divided into short chapters, each with their own set of puzzles, which require exploration of the settlement and some lateral thinking in their completion. Initial tasks revolve around simply finding items for the picnic but it soon becomes apparent that there is something else afoot and that a greater, more challenging quest awaits Mii.

I won’t reveal much more of the plotline here, partly as it is one of the game’s more intriguing elements but also because the game as it stands is not complete. Instead, the developers have taken the decision to release the game with the first five chapters playable now, with regular updates to complete the story but without any extra cost to the player. It’s an unusual approach, and something of a double-edged sword. As it is currently, the game is very short with a quick completion time and given the nature of the genre, it carries virtually no replay value, so it is possible that players will feel let down when they complete the final chapter.  However, the story does end on a wonderful cliffhanger, as Mii finally makes it out of the settlement and into the wider world only for seeming disaster to befall him, thus creating a great sense of desire to find out what happens next. As long as players do not have to wait too long for new chapters, the approach could prove successful. 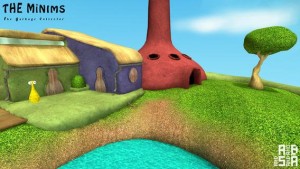 A game such as this lives and dies on two main factors, the puzzles and the story, and in most respects, The Minims can be seen to be a success. The puzzles range from being fairly obvious to slightly obscure, and players are encouraged to think outside the box to solve them. Moments of frustration may occasionally arise when it is clear what a player must do, just not how they may achieve it. However, persistence is the key and with only a limited number of elements to interact with, the solution will eventually present itself, although a hint function would be a useful addition for later updates. The description of the tasks also becomes slightly vaguer as the game progresses. For example an early puzzle might simply be to find a certain object, but a later one might be more general and require the player to escape the settlement, but without specifying the steps by which this can be achieved. This only adds to the challenge and the sense of satisfaction when a puzzle is successfully solved.

The story too is intriguing, set as it is in a pleasingly surreal world with striking landscapes and populated by simple yet charming characters whose visual design will appeal to fans of retro cartoons. The plot is revealed slowly, with individual scenes and conversations unfolding in a manner that some players might find too leisurely but which does maintain interest despite the initial mundanity of the tasks. This is not helped by the somewhat clunky script, which perhaps suffers from translation problems, but it is apparent that there is a message of sorts buried within, something which is admirable these days. Sound design is simple yet effective, with a haunting refrain that contributes to the surreal atmosphere but which can prove irritating in its repetitiveness, while sound effects are kept to a minimum.

The Minims follows in the footsteps of the aforementioned classics, and while it doesn’t quite reach their lofty heights, it is certainly a bold and imaginative take on the genre that warrants a closer look.  Its slow pace may prove off-putting, while it is short lived, with only five short chapters available now and once puzzles are complete there is absolutely no reason to replay them. Further releases should extend the game’s longevity and expand upon the mystery though and after seeing the final chapter’s cliffhanger, players are sure to be keen to see where the tale of Mii and U goes next. I know I am.

The Minims is available now on the App Store for 0.99c, with future updates available for free once the game has been purchased.