Home Guides The Best Wings In Terraria Mobile, and How to Get Them 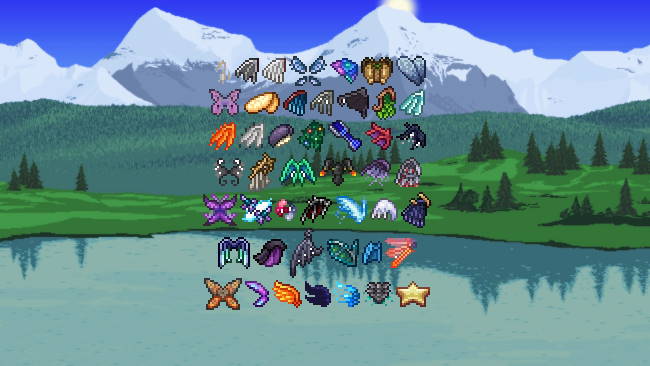 Wings in Terraria Mobile are some of the best accessories to have in the whole game. Wings allow you to jump and fly around for a short period of time, granting increased mobility, which is required to survive the harder boss fights. Today we’re here to tell you what the best wings are in Terraria Mobile and how to get them!

The best wings you can get in Terraria Mobile are from defeating the Moon Lord, the final boss of the game. As such, there’s going to be two lists in this guide to help you plan accordingly: pre-Moon Lord and post-Moon Lord wings.

After defeating the Golem found deep within the Jungle Temple, the Steampunker will sell the Steampunk Wings for 3 platinum coins.

Empress Wings are dropped by the Empress of Light. After you defeat Plantera, go to the Hallow between 7:30 PM and 12 AM. If you’re lucky, you’ll see a shiny, pastel-colored butterfly floating around – this is a Prismatic Lacewing. Kill the Lacewing and the Empress of Light will spawn, so be ready for a fight!

Fishron Wings are dropped by Duke Fishron. Fishron can be summoned at any point once your world is in Hardmode. To summon him, you’ll need to catch a Truffle Worm, a rare critter found in an underground glowing mushroom biome. Go to the ocean biome at the edge of the map and fish with the Truffle Worm as bait, and Duke Fishron will show up. The Fishron Wings are the strongest wings you can get before Moon Lord.

Related | Terraria Mobile: How to Use a Controller

The following wings all require luminite bars, an item dropped only by Moon Lord, the final boss of the game. The Moon Lord will automatically be summoned after all four Celestial Pillars are defeated. To summon the Celestial Pillars, you must defeat the Lunatic Cultist that spawns by the dungeon’s entrance.

Can be found inside the Moon Lord’s treasure bag, expert mode only. Though technically not wings, the Celestial Starboard has the best flight power of all the wings in the entire game.

And those are the best wings in all of Terraria Mobile! If you have any other tips or tricks to share, let us know in the comments below!