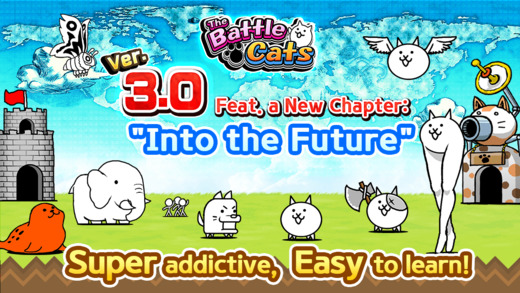 The Battle Cats, the excellent strategy game developed by PONOS, has managed to become one of the more successful iOS titles in a very short amount of time thanks to its gameplay experience and unique graphical style. The game has been receiving new content and updates pretty frequently and something new for The Battle Cats has been launched recently.

A new The Battle Cats special event is currently underway, adding content inspired by the SNK Playmore’s game Metal Slug Defense. During this collaboration event, players will be able to fight and recruit 11 Metal Slug characters and play in two special Metal Slug themed maps which offer some very nice rewards upon completion.

A few months back The Battle Cats received its latest update. The 3.0 update introduced a new story chapter in the game’s Story Mode called Into the Future, where players fight against a bizarre alien army. The update also added a new CatCombo tactical system, new unit abilities and new allies.

The Battle Cats is now available for download for free on the App Store. The new Metal Slug Defense collaboration is also underway right now so make sure to play the game if you want to experience brand new The Battle Cats content.