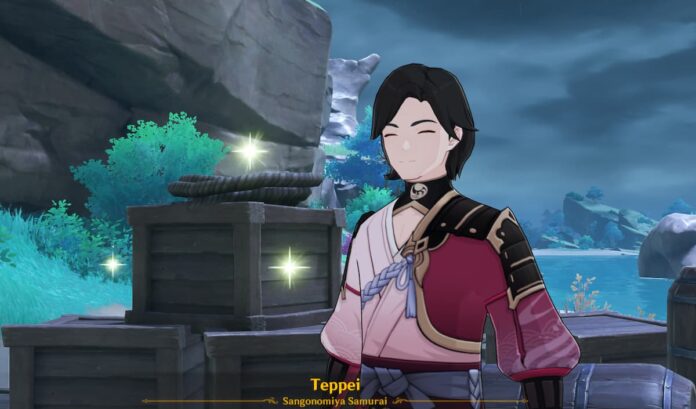 In search of their kin, the traveller arrived in the locked archipelago, Inazuma, in Genshin Impact. After viewing the poor conditions of people affected by the Sakoku Decree, the traveller decided to help abolish the cruel decree and joined the Watatasumi Army.

While heading to Resistance Army’s camp on Yashiori Island, Genshin Impact players meet Teppei on Nazuka Beach and save him from Shogunate Samurais. Then, Teppei takes them to the camps and introduces travellers to General Gorou and other resistance members.

Throughout Act II: Stillness, the Sublimation of Shadow and Act III: Omnipresence Over Mortals, Teppei plays a significant role but succumbs to the side effects of a delusion given by perfidious Fatuis. Towards the end of the Those Who Yearn For the Gods’ Gaze quest, players have to find Teppei in Genshin Impact.

Where is Teppei’s Location in Genshin Impact

Teppei is located in the Bourou Village on Watatsumi Island. Players will have to look around all the houses to find Teppei. He should be sitting on the porch of a house. Players can notice him from his resistance uniform.

Players would notice that Teppei has become suddenly older. Teppei explains how he wanted to help the resistance army, but he failed to contribute much due to his lack of vision. Teppei received a secret weapon from Fatui, which turned out to be a delusion. Because of using the delusion, Teppei lost his life force quickly, causing him to age faster and become weaker.

Teppei’s death was one of the saddest endings in Genshin Impact. Such a lively character falls prey to the plans of evil Fatui. After watching Teppei’s conditions, the traveller decides to put an end to the war, and the story leads to a great battle against the Fatuis, Shogun and her army.

Also Read | Who is Scaramouche in Genshin Impact