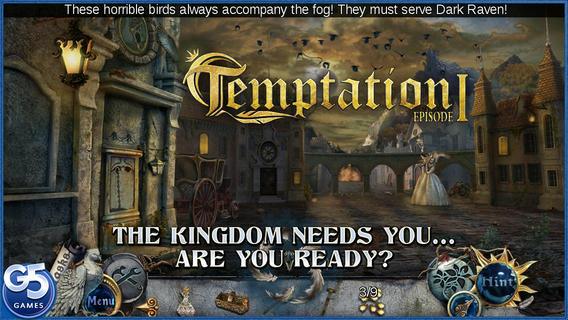 Temptation is a new hidden object game which tells the story of the mysterious Dark Raven and the deadly fog that he has sent to plague a small town. It is more heavily puzzle-based than many similar games and some of them are extremely tricky, so if you get stuck, just check out this walkthrough to help you out. This is part one of the guide and here we focus on the first part of the story set in the town.

The first thing to do is examine the bag on the right to collect the Queen inside. Then collect the eyeball from the Dead End sign on the left. You will also notice some fireflies, but you can’t collect them yet so remember them for later. You can’t access the gate on the right, the door on the left, or the stall on left, but tap on the open window on the left to receive the basket.  Then move north to scene 2.

Collect the net from the notice-board on the left and place the eyeball in the empty socket while you’re there, although you’ll have to come back later to complete this puzzle. Read the note under the notice for some background information. Use the net on the carriage to collect some fireflies (3 of 9) but as the carriage is missing its handle, you’ll have to return later to enter it.

Knock on the door next to the carriage to see a short cut-scene and to collect the bizarrely named ‘scrap’. Place the Queen on the clock at the top left but again this needs another item to complete it. You can’t do anything with the statue just yet. Return to scene 1.

Collect the fireflies (6 of 9) from the Dead End Sign, head back to scene 2 and then move straight on to scene 3.

As you enter scene 3 you will watch a short cut-scene involving the fog and an unfortunate townsperson. Collect the fireflies near the dog on right (6 of 9) but you need more items so return to the cute little fellow later. The bird statue on the left needs the fireflies you’ve been collecting so use them under its claw to light a lantern. Collect the door handle that is revealed. The fog spreads again, forcing you to return to scene 2.

Use the handle on the carriage door and collect the bone, although you can ignore the box for now as you can’t open it. Read the note for some more background info then head to scene 3.

Place the basket under rope near the dog then place the bone in the basket. The dog rises to safety and another basket is lowered. Inside is the Prince so collect it before the fog starts to spread again, pushing you back to scene 2.

Place the Prince in clock to set then hands in motion and reveal the bell clapper. Collect it then use it on the statue on the right to get the knife. A talking raven now appears in a short cut-scene but gives you the golden petal, a highly useful item which brings things back to life. Return to scene 1.

Use the clapper 3 times on the dove that is on the stall on the left then use the petal to bring it back to life. Use the scrap to release bird then re-enter the stall to access a hidden object game. Complete this to obtain the wire cutters. Use the knife to cut the rope on the gate on the right. Enter scene 4.

Use the chain on the notice-board then touch the eyebrows to reveal a note. Collect the black bird (2 of 3) from the corner then enter the carriage and examine the box. Use the key on the box to reveal a tricky puzzle. See below for the solution. When this is completed you can collect the tweezers, prompting another spread of the fog. Head back to scene 4, via scene 1.

Here you are presented with a puzzle box and a small icon which must be moved from the top of the screen to the bottom. To move it you must use the buttons with arrows on them. If there are multiple lit buttons with the same direction, any one of them can be pressed. However, hit the wrong button and the puzzle resets. The correct sequence is:

Down, down, right, clock-wise, down, left

Left, up, counter-clockwise, left, up

Counter-clockwise, down, down, right, right

Up, counter-clockwise, down, down, right

Use the tweezers on the letter box to collect the bird (3 of 3) and then return to scene 1.

The fog spreads once more, leaving you with only one way out. Examine the door on the left, use the scrap, then the birds to access another puzzle. Here you need to remove the black birds from the decoration so that you are left with only the white ones. Tapping on the birds removes or returns them. This one is a bit of trial and error so you are on your own unfortunately, but if you can’t figure it out there is the skip button to fall back on! After completing the puzzle, there is another cut-scene, and at the end of it you find yourself transported to another location, and one step closer to solving the mystery of Dark Raven.

You can check out the Part 2 walkthrough here.