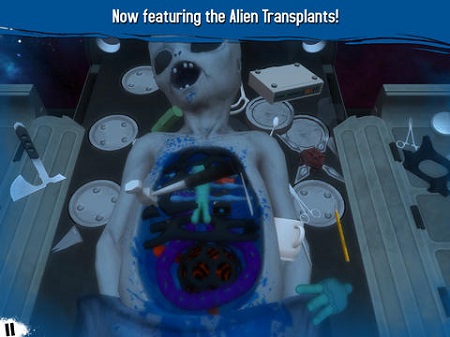 A new update is now available for the Boss Studios developed Surgeon Simulator, the iPad port of the over the top PC simulation game.

Just as we have reported not too long ago, the new update will allow gamers to open up aliens, see how they’re actually inside and try to operate on them. Which is not going to end well, considering how things easily go the wrong way with humans in Surgeon Simulator.

The new update includes six new transplants as well as improved iPad 3 support. Some of the game’s bugs have been fixed by the new update as well.

Managing to successfully complete the new operations does come with some nice rewards, as you will be able to unlock six new achievements. But you really shouldn’t need them to feel proud about yourself, considering you have managed to operate an alien life form.

Surgeon Simulator has been released not too long ago on iPad with a slew of features not available on the PC release. Even though the game is a simulator, the game doesn’t take itself too seriously. Each time gamers make a mistake during an operation, they’ll see the consequences of their mistakes in a really over the top way that’s actually quite funny to watch.

You can read more about the game and check out what are our thoughts on it by reading our full Surgeon Simulator review.