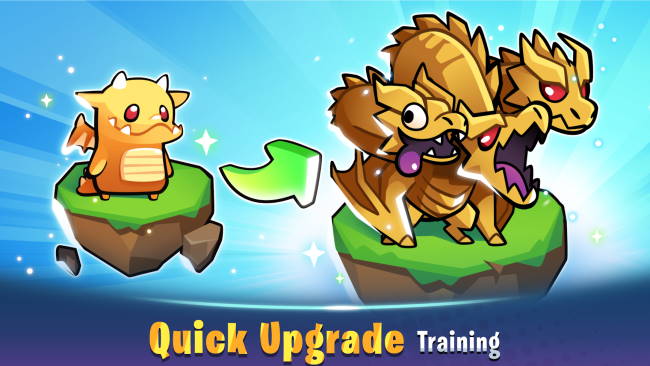 Summoner’s Greed is a tower defense game where you must protect your looted treasure by summoning powerful creatures and monsters. Each monster has their own unique skill set, and figuring out which ones are the best is the key to victory. If you’re going after some of the strongest monsters of the game, we’ve got you covered with our Summoner’s Greed best monsters list!

Speedy is an epic monster that supports his allied monsters instead of attacking. Adjacent monsters placed next to Speedy will have their attack speed increased. The higher level Speedy is, the greater the speed bonus is.

While the attack speed buff doesn’t sound that great on paper, Speedy’s buffing abilities become invaluable when paired with the strong but slow monsters later in the game. Unremarkable monsters become absolute beasts when paired with Speedy, especially those with crowd controlling special powers.

Mighty is an epic monster, and he’s basically the attack version of Speedy. Instead of buffing allied monsters’ attack speed, Mighty improves their attack damage. Buffing in general in Summoner’s Greed is extremely powerful, so don’t underestimate the totem-style monsters.

Slime King is a legendary monster that has extreme attack power. Slime King attacks slow, so he’s best paired with Speedy and Mighty. His special power is King Slam, an area attack that stuns nearby enemies for a few seconds.

Slime King becomes an absolute beast when paired with Mighty and Speedy. He’ll be able to tear apart enemies quickly and even stun lock them thanks to the buffs.

Kevin is a legendary monster that also has very high attack power. In fact, his base attack power is higher than Slime King’s. He has medium attack speed and the three different heads will let out their own attacks. Each attack can be either fire, lightning, or ice damage.

Kevin’s special power Trinity Beam lets all the heads shoot out laser beams. Sometimes the derpy third head will fire off a laser that deals ten times the normal damage it does!

Hellhound is a special monster that can only be acquired from limited time events. Hellhound has an area attack as his normal power, which makes him quite useful. His attack hits multiple enemies and it comes out fast, though it is somewhat lacking in attack power.

His special power boosts the attack power of adjacent monsters, just like Mighty. If you don’t have Mighty, Hellhound is a great substitute to use in place.

Felina is a legendary monster with an absurdly strong special power. Her normal attack is an area attack that deals decent damage and has medium speed. Her special power Dimensional Slash causes her to cut through the fabric of time itself, creating a massive slash that travels towards enemies.

Dimensional Slash is huge, as it covers just about the entire length of the screen. Felina will always launch it towards the nearest group of enemies, so she should be positioned on the bottom row to maximize the amount of monsters she hits with it.

Archangel Casielle is a legendary monster that attacks with icy cold axes. Casielle’s special power is Swords of Justice, an area attack that brings down frozen swords onto enemies, freezing them in place.

Casielle’s special power allows him to effectively lock down large groups of enemies for a substantial amount of time, especially if he’s paired with Speedy.

Pony Sparks is a special monster that zaps enemies with her electric horn. Her damage is decent and she attacks fast, but Pony Sparks’ true potential lies within her special power, Arc Lightning.

Arc Lightning summons a bolt of black lightning that damages multiple enemies in an area. This special power deals great damage and also stuns, so pair her up with Speedy to get enemies stuck.

What do you think of the list? Think another monster should be on here? Let us know in the comments below!