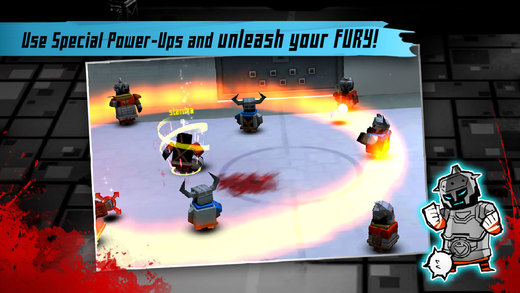 Striker Arena is a game that has gone a long way since it was originally unveiled last year. The game developed by Wizcorp was originally going to be a free to play game but the team eventually released it as a premium game as its gameplay mechanics couldn’t work with free to play features. After spending time with the game, I completely agree with the team, as Striker Arena’s gameplay experience would have definitely been hindered by IAPs and other free to play mechanics. Unfortunately some other issues prevent the game from being a definite must have for iOS devices owners.

In Striker Arena players will have to control one of three tribes, Vikings, Gladiators and Samurai, and play the Soccer of the Gods to settle an ancient dispute between them.  The game’s experience is a unique mix between sports and strategy games. When your controlled striker holds the ball, he will only be able to make three steps before having to pass the ball or shoot it at the goal normally or by using special moves. When making these three steps, the rest of the team and the opponents will also make moves accordingly, so players will have to somewhat anticipate their moves while making their owns. When the player’s team is not in possess of the ball, it will be possible to change formations in order to prevent  opponents from scoring. The basic gameplay mechanics work rather well when the player holds the ball but not as well during the defensive phase as the player has very little control on the rest of the team, lack of control that often leads to opponents scoring. A better variety of strategic and defensive options would have improved things vastly.

Striker Arena comes with a couple of play modes, including single and multiplayer modes. The main single player mode is Story Mode, where players will select one of the three clans, travel all over the game’s world and bring it to victory. Unfortunately Story Mode is one of the worst features of the game, as players are forced to complete a variety of missions within a time limit. Most of these missions actually teach players how to play the game, as they’re centered on specific gameplay mechanics, but they end up damaging the experience a bit since it’s possible to advance to the next match even without winning, making learning all of the mechanics feel somewhat pointless. Thankfully the quick match and multiplayer modes work way better than Story Mode, without missions or tutorials getting in the way.

Striker Arena is a mixed bag. There are some features that Wizcorp has done right, like the gameplay mechanics when the player has the ball, the different arenas with different gimmicks and the unique premise and graphical style, but also wrong, such as the limited strategy options when not holding the ball and the weird Story Mode’s progression. Even with its flaws, the game is still an enjoyable experience but it could have been much better with some tweaks here and there.