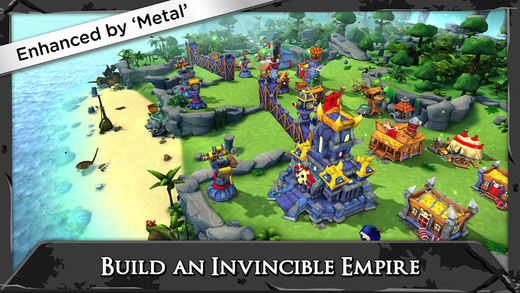 Clash of Clans is one of the more popular mobile titles ever released, with countless players spending time with the game daily. When a game is so successful, it’s not surprising to see titles offering a similar gameplay experience with a few twists.

Raids of Glory is yet another game that plays a lot like Clash of Clans, with players having to build and mantain a stronghold, recruit characters and get into battle. The main difference between Raids of Glory and Clash of Clans is that the game developed by Nitro Games features pirates and a single player compaign where your pirates will have to fight against the Reeking Rogues. The game also features a beautiful 3D island so there’s also some exploring to do.

Being a free to play game, Raids of Glory features optional IAPs that allow players to purchase extra skulls, the game’s currency, for real money. Luckily these skulls can be obtained by playing the game so you really don’t need to spend money if you’re not afraid of a little grinding.

Raids of Glory is now available for free on the App Store. The game is not all that different from Clash Of Clans but the pirate setting and the beautiful graphics make Raids of Glory a worthwhile experience if you’re into this type of strategy games. And if you have downloaded it already, you can check out our cheats and tips for it!