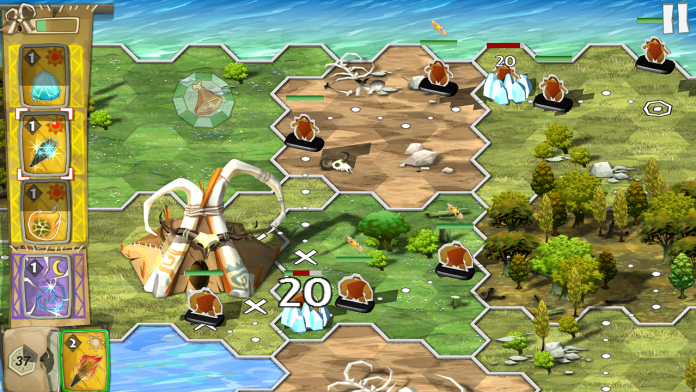 Another unique strategy game is now available for download on the App Store. The game is really unique in its being a hybrid between several different genres like tower defence and card games.

Caveman Wars stars several cavemen whose only desire it to protect their huts from different enemies like other cavemen, ferocius beasts and savage dinosaurs. These enemies appear randomly on the map, moving along their path to take down your hut and steal everything they can.

To defend the hut, your caveman will use all the weapons at his disposal, which are represented by several different cards. During the game you will only be able to equipe three of the fifty cards of your deck. As in other card games, these cards will be randomly assigned to you. The only way to improve your power is to buy booster packs and obtain even more powerful cards by defeated enemies.

With so many different genre mashed together, Caveman Wars sets itself apart from the competition in a few ways. The game may not be everyone’s cup of tea but it’s undeniable that the game has a lot going on for it.

If you’re interested in the game, you can give it a try right now by downloading it from the App Store. The game comes with some IAPs that don’t really get in the way.