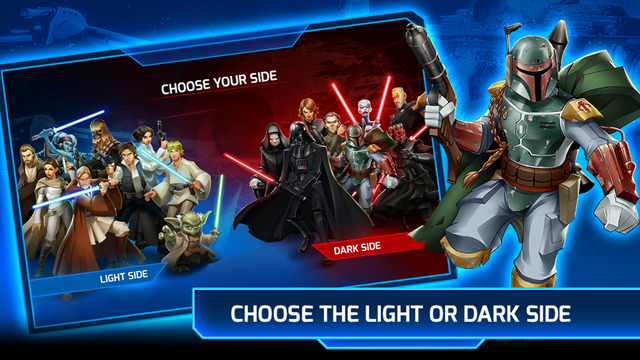 The Star Wars franchise is one of the more successful franchises ever, spawning several video games based on it. Among the more recent Star Wars games , Star Wars: Galactic Defense looked like a really promising game. The tower defense game developed by DeNa seemed to sport a good gameplay experience with plenty of content and fan service. Unfortunately it doesn’t take that much time to understand how Star Wars: Galactic Defense is not as good as it looked like before release.

Star Wars: Galactic Defense features plenty of content like a variety of maps, towers, a power-up system, multiple difficulty levels and even a hero system which allows players to deploy one of the key characters of the series, complete with his or her own special powers. All these gameplay features, however, are really mediocre: maps are generic and uninspired, the power-up system relies heavily on IAPs and even the hero system falls short of expectations due to a really bad IAP implementation. In order to unlock any hero, players are forced to spend currency for a chance of unlocking one of the heroes. This means that most of the times you will end up wasting time and money to unlock a character you already have or have no interest in using in the game.

The hero system isn’t the only feature that’s damaged by the bad IAPs implementation, as pretty much all of the more interesting features are locked behind paywalls,. This makes playing through the game without spending money really dull, as you will only have the most basic features at your disposal. Making matters worse are the one time use power ups, also obtained only through IAPs, which are sometimes required to complete some of the stages. The  IAPs are so bad, it’s a wonder the energy system included in the game is not as offensive as they are.

Even if the IAPs weren’t so bad, Star Wars: Galactic Defense would have been a mediocre tower defense experience. The available towers come with features that have been seen in several other games, with the leveling system being almost pointless, as improvements are really hard to notice. There are also no customization possibilities, a lack that damages the whole experience even further.

Despite all these issues, Star Wars: Galactic Defense isn’t an entirely bad game, just an incredibly bland experience that will bore most tower defense enthusiasts in a few hours. A real shame, as the game had the potential to be a good tower defense title rather than the cash grab it really is.