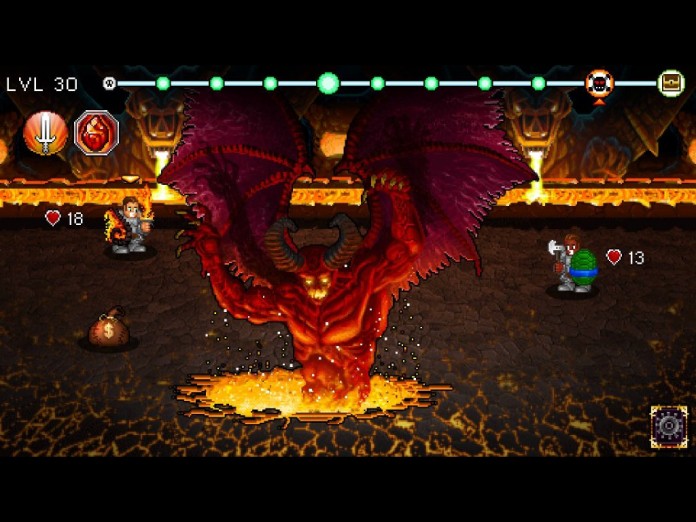 So you’re a nobody with seemingly no future in life, doomed to ignominy and to die having achieved nothing. Then you stumble upon a near-derelict bar and discover that adventures are drawn to not Grog or Mead but Soda. Yes, the fizzy stuff gives the Heroes Dutch courage to brave the dangers of dungeons. It’s here where you sense an opportunity to turn your fortune around.

Soda Dungeon is the latest in dungeon-rush genre, where you gather a party and attempt to clear a dungeon. But this dungeon has many, many floors and it gets progressively tougher to the point that defeat is all but inevitable. Thankfully, while your recruited heroes scamper away never to be seen again once they are beaten, you keep whatever loot they gained.

The key in Dungeon Soda then, is to get as far as you can and then hope you get better items to equip new recruits to improve their survivability or get more money to upgrade your bar and get better heroes. Soda Dungeon is simplistic, even compared to many F2P dungeon rush games; There’s no summoning, no level up, no enhancing, no crafting or any other gimmicks that are the staples of the dungeon rush genre. Hell, there’s no energy system. You’d think this would make it for a bland game but the fact that you can just get on with the game instead of worrying about what to do is almost refreshing and the game does a few a-ha moments that put a smile on your face and increase that “one more go” feeling.

Another nifty feature is sometimes you’ll come across a forked path. You can choose to just continue as normal or you can risk picking a door; one has a bonus treasure or a room that gives you positive benefit, such as restored health. The other has a trap that can ruin even a high powered team; such effects include Poison, Burn and Sleep.

Not surprisingly, Dungeon Soda has an auto option and it’s a good feature to have when it comes to grinding for money. The AI is average; it’ll make some bizarre choices now and then but as long as you’re well equipped, it can get the job done. Also if you’re worried about starting from level 1 again and again, a certain wizard, once his services have been brought, will warp you every ten levels you’ve completed. In terms of presentation, it’s very reminiscent of a high quality Amiga game, especially the graphics. The backgrounds are (purposely) stereotypical (you begin the dungeon in a cave) but at least it looks nice and the music, which is catchy and won’t have you turning the sound down. The humor is also amusing and again gives it that Amiga-vibe.

So while Dungeon Soda won’t have you playing for long hours or even for a long time after a few weeks nor is it something you’ll come back to once you’re done with it, it’s still a good division and the, while the pop-up ads are annoying, at least it doesn’t pressure you into spending real money, making it a welcome division.