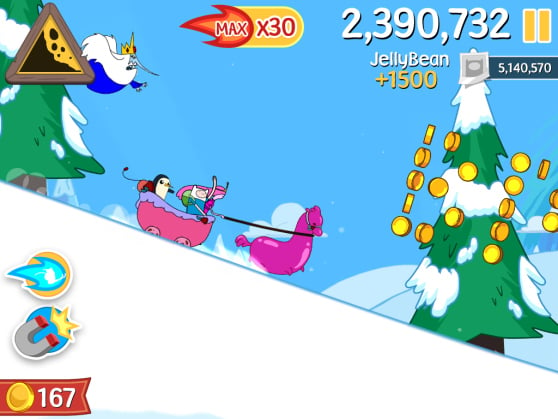 Ski Safari: Adventure Time is yet another endless runner game that can offer hours of pure and simple fun. The game is made more engaging by the presence of the Adventure Time characters, something that should make fans of the show quite happy.

In Ski Safari: Adventure Time you will control Finn as he slides down a mountain, hoping to escape in time from an avalanche. Riding with Finn are other popular Adventure Time characters like Jake, Ice King, LSP, Marceline, Princess Bubblegum, Rainicorn, Gunter, and many others.

Ski Safari: Adventure Time is not so different from Ski Safari in its gameplay experience. Still, if you’re a newcomes to the series or simply want to know more about the game, you may want to follow our tips and tricks guide for the game. Get ready to run, that avalanche won’t be waiting for you to get ready.

It’s a really a good idea to avoid any rock found during the game , as they will make you lose precious time and get caught in the avalanche. Some gamers may make the mistake of avoiding anything they see coming for fear of losing time, but tt’s better to pay attention to what is coming, as you might meet some of your friend. Running through the other Adventure Time friends will net you all kinds of nice boosts.

The same can be said for the chalets you’ll encounter. Riding through them will be quite beneficial, giving a speed boost that will keep you ahead of the avalanche for quite some time.

Keeping a good speed is very important in the game, as that will allow you to stay ahead of the avalanche. Aside from the boosts given by friends and chalets, you can also keep your speed up and even increase it a bit by landing properly. Landing with a flat angle will allow you to increase your maximum speed. Make sure your landings are as clear as possible, as a wrong one will make you lose speed instantly.

Earning coins in the game may take a long time if you’re just focused on playing the game without paying attention to the mini-missions. Completing them will allow you to earn more coins and unlock more contents more quickly. To check out your current progress, simply pause the game or tap the Missions icon on the game’s main menu.