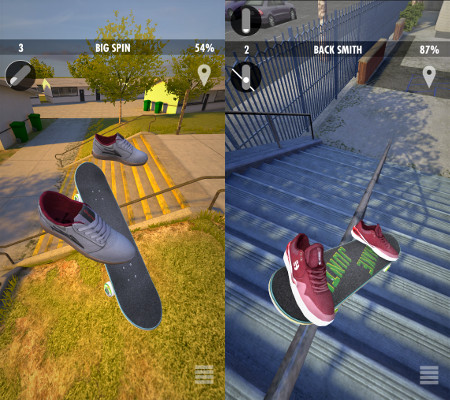 The App Store has no lack of skateboarding game, with several titles now available that offer a different spin on a similar gameplay formula, like the recently released Epic Skater, which combines endless runner games with skateboarding games features.

And it really looks like there won’t be an end to the skateboarding games launching on iOS, as another game will be released soon on the App Store.

Skater, developed by Frosch Media, seems to be more focused on a realistic experience like True Skate and a few other titles. Players will not be controlling a character but a skateboard, with only the board and feet being visible on screen together with the actual skate parks. The locations also promise to be realistic, recreated from on site photography and more.

Together with the other play modes, there will also be a free form where it will be possible for players to whataver they want in each of the game’s stages.

Skater will be released soon on the App Store. The game should hit the store in a couple of weeks. We will let you know more about the game’s release as soon as more is available on the matter, so stay tuned for all the latest updates.