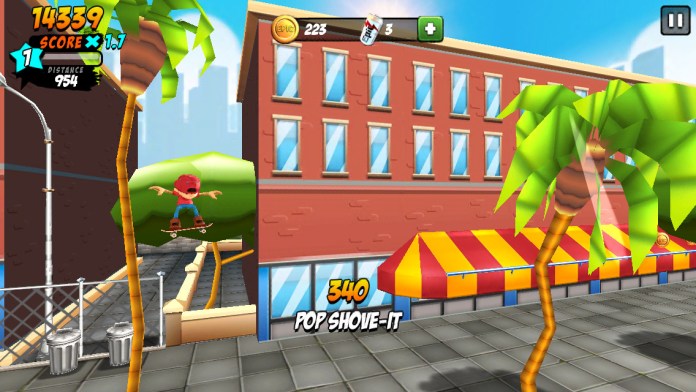 The Endless Runner genre is probably one of the more successful genres of recent times. There are countless new games released each month, each one providing a different spin to a gameplay formula that doesn’t seem to find a find to truly change and evolve. No matter how twisted the experience gets, its basic are hardly changed.

Epic Skater, developed by Kongrate, is yet another endless runner that tries to do something different, combining the basics of the genre with some features that are usually found in skateboarding games. Despite what may seem at the beginning, the game manages to do a really good job with this mix, providing a gameplay experience that becomes better and better with each new trick unlocked.

The basics of Epic Skater are quite simple. You control a skater who will be moving endlessly forward on his skateboard until he fails in avoiding an obstacle or misses a trick. The first few games of Epic Skater are quite frustrating due to the game’s physics, which feel a little akward. The limited number of tricks also makes the first runs quite dull, since the limited variety is coupled with the difficulty of pulling them properly. Things, luckily, pick up as soon as you manage to level up, learn new tricks and get used to the physics and controls.

Epic Skater includes a good number of tricks, with some of them being really hard to perform while others are just perfect to start building up your combos. And how satisying is to create a big one, not only for the increased bonus points but also for having being able to land some complicated tricks without failing.

The rest of the Epic Skater gameplay experience is quite standard for an endless runner, as you will be collecting coins during each run, avoid obstacles, completing a set of challenges and more. Coins are used to upgrade your skater, purchase boosts and more. Energy Drinks that will allow you to continue running after failing are also included. Both coins are Energy Drinks can also be purchase as IAPs.

If it wasn’t for the skateboarding and tricks, Epic Skater would have been a rather “unepic” endless runner game. Luckily, the whole skateboarding features add a really interesting dimension to the gameplay experience, keeping gamers engaged until they have unlocked every trick and performed all of them flawlessly. The game may require some time to click, since physics feel rather strange in the beginning and tricks are limited, but once it does, Epic Skater becomes a really satisfying experience.