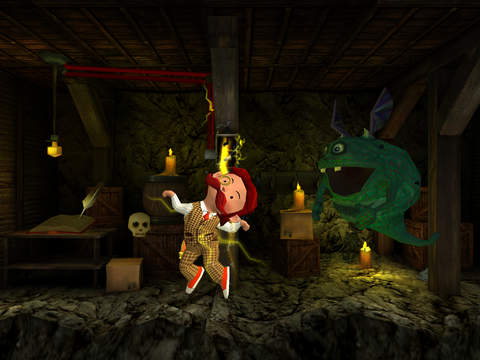 The Phantom PI Mission Apparition, developed by Rocket 5 Studios, has managed to make itself known even before release thanks to its really high quality. The game is a charming side-scrolling adventure game that stars a private detective who is specialized in helping ghosts. This fact alone leads to some really hilarious situations, which give the game quite a bit of charm.

The overall premise isn’t the only thing that’s good about the game. The Phantom PI Mission Apparition includes 20 different levels with plenty of puzzles to complete, cards to collect and several other collectibles. The collecting aspect is quite big, so much that it makes the game feel almost like a normal platform game.

The Phantom PI Mission Apparition is a really unique game that will surely make adventure and platform games fans really happy. Even if you only like one of the two genre you may want to check out the game, as it has a really nicely crafted gameplay experience.

The Phantom PI Mission Apparition is now available for purchase on the App Store for $3.99.