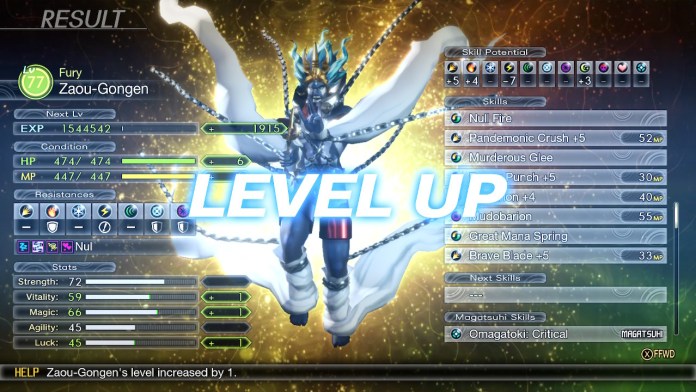 The world of Da’at is a very dangerous one, and the Nahobino and his party of demons always need to be at the top of their game in Shin Megami Tensei V to survive such a harsh world. And to do so, they will need to level up as quickly as possible.

Here’s how to level up fast in Shin Megami Tensei V.

How to Get EXP in Shin Megami Tensei V

In Shin Megami Tensei V, EXP is obtained in a variety of ways. The most common one is by fighting and defeating demons roaming Da’at. Generally, the higher the level of the demons you have defeated is compared to your, the more EXP points you will receive.

Things are a little different when you encounter a Kushi Mitama or Ara Mitama. These two special demons grant a lot of experience upon defeat, but they null every attack type with the exception of one. As such, we suggest you use a Spyglass to learn about their weaknesses before fighting them, as they run on their first turn most of the time.

EXP in Shin Megami Tensei V can also be obtained outside of battle. Completing sidequests will reward you not only with items, but also with varying amounts of EXP, and interacting with Demon Statues will allow all the demons in your party to level up. Demons Statues do not grant EXP to the Nahobino, so do not be surprised when he doesn’t level up following an interaction with these statues.

Shin Megami Tensei V also features some special items that level up the Nahobino and the demons in his party almost instantly. The Gospel items grant enough EXP to the Nahobino to level up after the next battle, while the Grimoires do the same for demons, but only if their level is below that of the Nahobino.

How to Level Up Quickly in Shin Megami Tensei V

The only real way to level up quickly in Shin Megami Tensei V is by defeating Kushi Mitama and Ara Mitama. As these are rare demons, you can purchase the Mitama Dance of EXP DLC to increase their spawn rate. This, however, should be your last resort, as generally, you should get enough EXP by fighting demons on your same level and completing sidequests. If you are having trouble during a particular battle, you should probably improve your party composition, as taking advantage of the weakness system is way more important than raw stats.

If everything fails, you can always drop the difficulty. Shin Megami Tensei V, despite the streamlining over previous entries in the series, is still a challenging game, so you really shouldn’t feel ashamed of lowering the difficulty to proceed through the main story.

Shin Megami Tensei V: How to Level Up Quickly