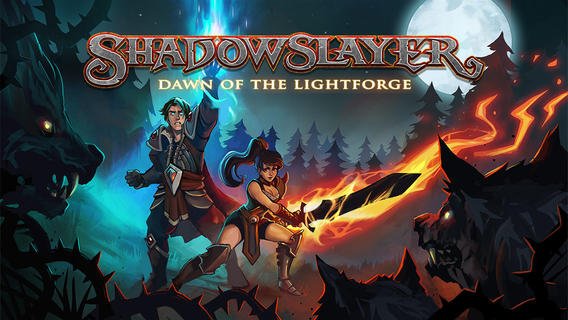 Z2Live is a developer perhaps best known for its strategy and action titles, such as Nitro, MetalStorm and Trade Nations, but Shadowslayer marks their first foray into action RPG territory, and for a first attempt at such a game, it proves largely successful. It combines a well-realised world, flexible and intuitive combat system, and elements of world building into a nicely-rounded package that has much to offer to fans of classics such as Secret of Mana, Golden Sun and the Zelda series.

The story is fairly standard fantasy fodder, and charts the exploits of a lowly but honourable hero, Tristan, as he rises up to fulfil his destiny in an epic quest to defeat an evil enemy who threatens the peace of the land. Along the way he meets up with various quirky characters, such as the ditsy Maia and the smooth salesman Julian, who set quests and tasks, while also providing help and advice on how best to proceed. The quests themselves are readily accessed via a map screen and are usually simple enough in principle, requiring Tristan to venture into murky woods and unexplored valleys in search of treasure or to aid the lost and stranded.

Of course, these areas are populated by a wide range of creatures and assorted nasties, all of which are eager to spill brave Tristan’s blood. As he is a great hero in the making, he has an ever expanding repertoire of offensive and defensive moves at his disposal, which vary depending on whether you choose to play as a wizard or a warrior. Movement and combat are elegantly simple and instinctive, requiring a simple touch of the screen to set Tristan running to the required location or to unleash his fury upon an attacking monster. Offensive moves can be combined to increase their effectiveness, but require time to re-charge, thus necessitating a degree of thought in their application, combined with judicious use of strategic withdrawal as enemies get more aggressive and intelligent. 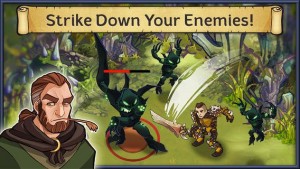 Outside of battle and questing, Tristan must also tend to his ever-growing village, building forges, town halls, bakeries, houses and other assorted structures to meet the needs of his people. There is a huge range of buildings to choose from and through careful management of resources, new weapons and armour can be crafted, and items bought and sold. The player is thus presented with almost infinite possibilities in the development of their town and it is immensely satisfying to see your humble village grow into a bustling fantasy metropolis. This aspect adds much to Shadowslayer’s appeal, and could almost form the basis of a game in itself.

The game is presented in a 3D isometric view, both for combat and village building, with highly pleasing graphics that show the detailed world in all its glory. Colours are bright and vibrant where appropriate, such as for our heroes and in the village, while the forests and other environments are suitably moody and murky. The range of enemies is extensive, and although there are a few stereotypical creatures to be found within their ranks, the majority are quite original and are pleasingly evil in their design, with good animation to boot.

If criticisms are to be made, they are generally quite minor. The quests themselves are a touch too simple and repetitive, requiring only for a path to be followed to its end, battling monsters as they appear, and lacking any opportunity for exploration, while the script is clichéd and troubled by some terrible dialogue, spoken by bland characters. Much emphasis is made on in-game purchases which may put off some players, but beyond these niggles there is much to enjoy here. The story is certainly epic in scale, combat is fluid and fun, and the world really feels as if it lives and breathes. Some replay value is offered by the choice of classes, wizard and warrior, and the town-building adds some much-needed depth and variety. Although not a classic action RPG by any means, this is a commendable enough attempt and it is certainly worth venturing into the realm of the Shadowslayer, if only for a while.