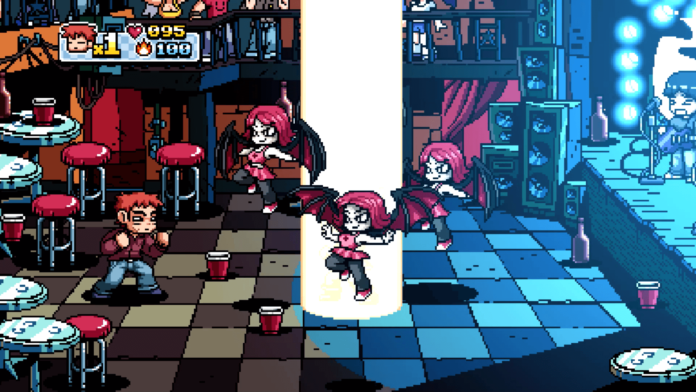 Alongside the regular characters available from the start, Scott Pilgrim vs. The World: The Game Complete Edition features two additional characters – Negascott and Knives Chau. The two characters aren’t entirely new characters, as they are based on Scott and Kim, respectively, but they still nice to have, especially if the other characters have started feeling a little stale.

So, is Knives a good choice over Kim? Let us find out!

Knives Chau is based upon Kim, and plays a lot like her, featuring the same basic moves and combos. As such, just like Kim, Knives comes with great attack power and speed, but very poor crowd control due to the range and the recovery time of her attacks. These issues are partly fixed by her Tech Attack 2, which is among the best in the entire game.

Like most of the other characters, Knives has two unique moves that set her apart from all the other characters. The first one, Tech Attack 1, performed by pressing down and heavy attack, is a forward spinning attack that is learned at level 16. While not terribly powerful, it has decent knockback, making it a good move to escape crowds and pressure.

Tech Attack 2, learned vis special training, is performed by pressing down and heavy attack while in mid-air. This is a great special technique, as it lets Knives control space and keep enemies away effectively, especially if you become good at using it in the air over and over. Not a proper combo starter, but a great move nonetheless, and an essential tool in Knives’ arsenal.