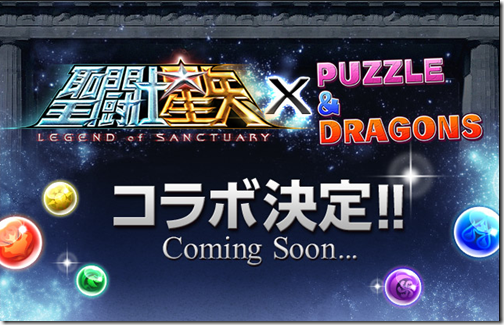 Hot on the announcement of a new cross-over game which will combine the Puzzle & Dragons experience with the Dragon Ball saga, GungHo has announced today that yet another collaboration with a manga and anime series is coming soon for their successful mobile title.

The new Saint Seiya Puzzle & Dragons collaboration will allow gamers to meet several characters from the 3D movie Saint Seiya: Legend Of Sanctuary. Just like the previous collaborations, the Saint Seiya one is only going to be available for a limited time. We have no news on when it’s actually coming or if its coming West in the near future. Some of the anime collaborations for the game have made it West, like the Neon Genesis Evangelion one, so there’s a good chance that this one may come over as well.

The previously mentioned new cross-over title based on the Dragon Ball series has also to be dated and detailed. It’s probably going to be something more that previous collaborations, since the whole setting looks like will change with some new gameplay features getting included for the occasion.

Puzzle & Dragons is now available for download on the App Store. It’s a really good game with several interesting gameplay features so consider taking a look at it if you fancy an involving experience that can last you quite a long time.