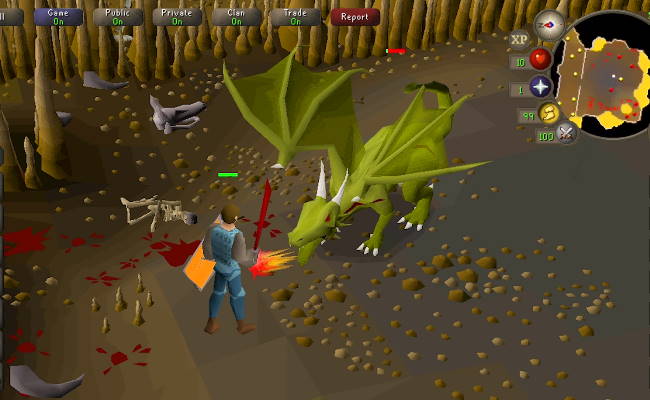 RuneScape Old School is here on mobile, and it brings with it the full RuneScape experience that has been ongoing for over a decade now. The game is more accessible than it ever has been, but it can still be a little overwhelming for new players. That’s why we’re here today with our RuneScape Old School Mobile beginner’s guide, to show you some helpful tips and tricks to get started on the right foot!

Welcome to RuneScape Old School! If this is your first time creating a character, the game will start you off on Tutorial Island. You can learn all the game’s fundamentals here by talking to the various NPCs hanging around the island.

The first NPC you talk to should be the Gielinor Guide. The guide will ask you if you’ve ever played RuneScape before, and you should respond with no. This will set you up later for the “adventurer’s path” system, which is basically a set of goals that are designed to help new players start their adventure.

Aside from that, Tutorial Island is fairly straightforward. Be sure to talk to everyone and learn how to do all the basic mechanics of the game. We highly recommend not skipping anything, as RuneScape is a very old game and is unlike anything modern. You’ll be very lost if you don’t know the basics!

After you complete Tutorial Island, you’ll find yourself in Lumbridge Castle. This is the starting area for all players, so you’ll most likely see a bunch of real players running around.

You can take this time to walk around and explore your surroundings, if you’d like. You can talk to any NPCs you find, and they may even have a quest for you. The quests that you can get in Lumbridge will often teach you how to do different skills, such as woodcutting, fishing, cooking, and more.

If you want to find new quests quicker, take a look at the world map by tapping the world button near the minimap – the button looks like an Earth.

On the world map, you’ll get a detailed view of the entire world of RuneScape. You’ll see that there are tons of icons littered all over the map – these icons all represent something important, and you can see what they are on the list to the left of the world map.

Quest givers are indicated by a blue star icon, mapped by the “Quest start” label. These icons have NPCs around the area that will give you new quests when you talk to them. Also, if you’re looking for explanations on how to perform certain skills, look for tutors on the map. There is a tutor for just about every skill in the game, so if you’re ever confused, find them and chat them up!

Right outside the gates of Lumbridge Castle, you’ll find Adventurer Jon. He’ll set you up with the adventure paths system we mentioned earlier, the list of goals that are designed to show you how to get stronger as an adventurer. The adventurer’s path goals are very well-designed, and they lead you down the general progression route, so following them is a good idea.

The Basics of Combat

By now, you’re probably itching for a fight. Combat in RuneScape is done automatically – simply tap an enemy to start attacking them. If you’re using a melee weapon, you have four fighting styles: aggressive, accurate, defensive, and controlled. The options available to you are dependent on your currently equipped weapon.

Aggressive styles allow you to deal more damage but tend to miss a lot more, while accurate styles trade damage for accuracy. Defensive styles let you dodge enemy attacks more often, but you deal less damage in return. Controlled styles are a nice balance between the three, but you earn less experience.

Ranged weapons have their own set of styles: accurate, rapid, and longrange. Accurate lets you land more hits with your bow, while rapid increases your attack speed with bows. Longrange lets you attack with bows from a farther distance.

If you’re going to be primarily attacking with bows, we recommend talking to the ranged combat tutor north of Lumbridge Castle. She can enable an option for you that makes you automatically equip arrows to your ammo slot when you pick them up, which is super handy for ranged play.

You can switch between styles on the fly, so make sure to pick one that best suits your fighting style. Keep in mind that you earn certain experience for the style you have chosen!

Almost every interaction in RuneScape is done through the skill system. Every action you take will earn experience for a certain skill. Chop down a tree? You get woodcutting experience! Fighting with an aggressive style? You get attack experience! Taking damage in combat? You get health experience!

Basically, the more you explore and the more things you do, your character will naturally get stronger. Certain actions require you to have a skill at a high enough level, so make sure to train your skills evenly. For example, if you want to wear a heavy piece of armor, you’ll need to make sure your defense skill is high enough, so start fighting with a defensive style.

Remember that almost every skill in the game has a tutor to go along with it, so if you want to know more in the game itself, seek out the tutors!

In addition to swords and bows, you can also wield powerful magic with the aid of runes. Magic spells can be cast through your spell book. Each spell costs a certain amount of runes to cast, and runes can be found from slain monsters or bought from shops.

Your magic skill levels up just like your other combat skills, so the more spells you cast, the stronger your magic will be. You will also unlock more powerful spells as you level up your magic skill.

Early on you’ll probably find yourself running out of runes often, but it gets easier later on. You’ll eventually be able to get into runecraft, which lets you craft runes on your own. Also, you can wield elemental staves which provide an unlimited supply of the corresponding element. For example, wielding an air staff would make air spells free to cast.

Your hero also has access to passive buffs called prayers. Prayers can be activated through the prayer tab, and they provide you with always active bonuses. However, prayers cost prayer points to remain active, and once you run out you must stop by an altar to pray and recharge your prayer points.

You start out with a single point in the prayer skill, so you can activate your first prayer for about a few seconds before you run out of prayer points. You may have noticed that most monsters drop bones when they are slain – make sure to pick them up and bury them, as this increases your prayer skill.

You now know all the crucial basics to starting your RuneScape adventure. The beauty of RuneScape is that your adventure is yours – do you want to spend your day frolicking in nature, building campfires and exploring the world? You can do that! Or do you fancy yourself as a stalwart warrior in search of the greatest battles? You can do that too!

Choose what you want to focus on, and train your skills accordingly. Then, once you’re strong enough, it’s time to head out of Lumbridge and explore the world of RuneScape. There’s a lot to see, and be sure to keep an eye out for the quest starters as they’ll often teach you new mechanics and reveal more of the story to you!

Have any more tips or tricks to share for new adventurers? Let us know in the comments below!