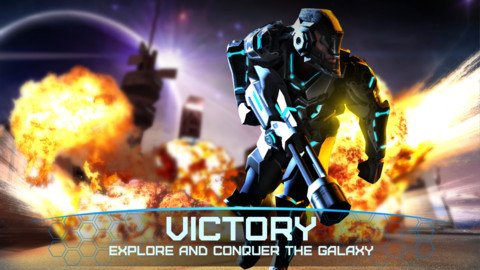 Hothead Games already proved that they know how to handle their card games, with previous iOS releases from the Big Win series. Now they have prepared a feast for the eyes of iPhone and iPad owners with the release of Rivals at War: 2084, a space-themed card trading shooter. Read on the review for the iOS version to find out more about this game.

Set in a not-so-far away future, Rivals at War: 2084 puts you in charge of a team of soldiers that must accomplish various interplanetary objectives, like rescuing hostages, protecting intelligence and so on. The interesting part comes from the fact that you are a sort of a manager of the team, meaning that you don’t get to control them directly – instead just prepare the line-up, add special skills and send them to battle.

In other words, you will be collecting cards (we have soldier cards, skill cards, gear cards and boost cards) and mix and match until you get the best possible squad out there, ready to face the enemy. Enemy which does the exact same thing, because RaW: 2084 is a multiplayer game and you will always play against human teams! 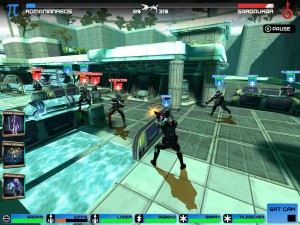 Visually, the game is absolutely stunning and looks amazing on my iPad’s screen. There is a nice level of details, there are some nice finishing touches and future looks good, generally.

The whole battle action, though, is sometimes lacking. In the game, soldiers are of multiple classes and each has their own behavior. However, it sometimes makes no sense for my demolisher (who likes to stay away from the heat and take out players from afar), to simply look at the objective area that my team should be in and completely ignore it. The AI should be made in such a way to behave as their class instructs them, but also have some common sense. However, since it’s the AI that controls both teams, those little hiccups won’t affect you too much unless you have a team full of demolishers, which is unlikely to happen. 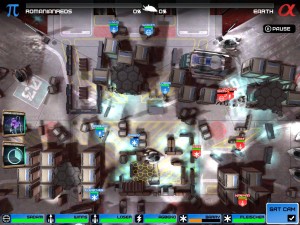 Eventually, it all resumes to creating the best possible deck and always using the best possible power-up cards in order to make sure that you win your battles. It’s a risky thing, because you never know beforehand what opponent you will face, and you might end up loading your best power-up cards for a highly inferior enemy, and tackle a better one with poor cards. But you can’t win them all, eh?

The problem with this concept is that you will eventually run out of money (or at least out of money to buy the really valuable cards) and you will either go empty-handed and almost guarantee a defeat or spend some real life dollars to get more cards. This is mostly the only option if you want a top soldiers card pack, for example and this does take away some of our fun, but game developers have to eat too so in the end it’s fully understandable.

Even without spending a dime, if you are not overly active, you can still have a fun time playing Rivals at War: 2084 for iOS. I did so and did pretty well with some nice fund management and smart spending. I also managed to win most of my battles even against higher level players, so it clearly proves that you don’t have to spend real money to get the most out of the game.

My team of champions

And I guess that this means that you should at least give Rivals at War: 2084 a try. Even if it might get boring eventually to just watch the battles and not be able to directly influence the outcome by showing your shooting skills, I am still far from that point and I already have over 20 battles under my belt. Add to that the visual appeal and the fast, responsive interface and you have a great game to play when you should be working! 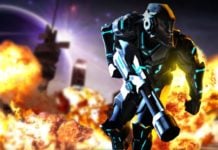 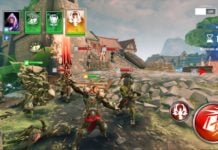 Forge an Epic Team of Heroes in Forged Fantasy, Available Now on Mobile