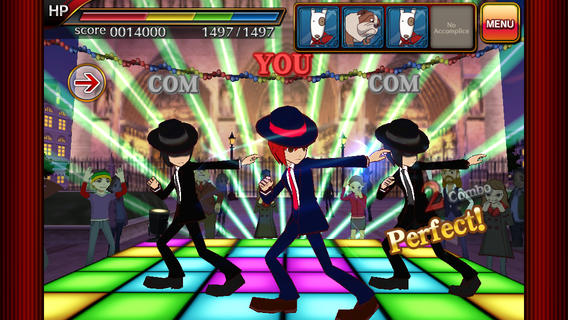 Back in 2012, SEGA released a really interesting game called Rhythm Thief & The Emperor Treasure on Nintendo 3DS. The game is a unique mix of adventure and rhythm games, with the rhythm game elements being the main focus. The game is still today one of the most unusual 3DS game, as no other developer has tried replicating the game’s formula.

The story is pretty much the same as in the 3DS version of the game, with Raphael trying to uncover the mystery surrounding the resurrection on Napoleon. While the premise can seem completely crazy, the game’s story is one of its strongest elements: it’s so well crafted that will keep you guessing until you final receive the answers you, and Raphael, have been seeking. The iOS version of the game has done away with the cutscenes of the 3DS release, using some quick slideshows that only detail the main story events. The story still makes sense, but loses some minor details which definitely made it enjoyable.

The gameplay experience has also been slightly changed to better suit mobile devices. The game has received a number of new minigames as well as some social features, which don’t really add much, to be completely honest. They’re well done, though, so it’s not like they drag down the game’s overall experience.

Introducing the new features was something that SEGA had to do, considering the new progression system. Instead of exploring the city freely, Rhythm Thief & the Paris Caper uses a board system where minigames, story events and rhythm sections are included. It’s a good way to keep the gameplay experience smooth and engaging.

The true meat of the game are the rhythm sequences. They come with some great sounding music tracks with a jazzy feel and play in a really smooth way, featuring a system not too different from other rhythm games like Dance Dance Revolution. The sequences are short but intense, perfect to play on the go multiple times. And you will be doing it, rest assured: the experience is so smooth that you’ll be addicted to it very, very soon.

In light of the game’s high quality, the in-app purchases are really no offenders in Rhythm Thief & the Paris Caper. All of the contents offered for real money can be accessed even without oaying, with the exception, unfortunately, of the extra stages. At the same time, many extra missions will be offered for free over time, mitigating the issue of having extra contents locked behind a paywall.

Rhythm Thief & the Paris Caper has a feature that I would have gladly done without. In order for the game to work, you will have to always be connected to SEGA’s servers, meaning that you cannot play the game without an active internet connection. I find that this is quite limiting and frustrating for a paid title: why shoulnd’t I be able to enjoy a game I padi for if, for some reason, I cannot access the internet, like on a plane?

Rhythm Thief & the Paris Caper is one of the best rhythm game available on iOS thanks to its unique gameplay experience. The game is pretty much flawless, except for the always on requirement, and will keep you engaged for a long time.