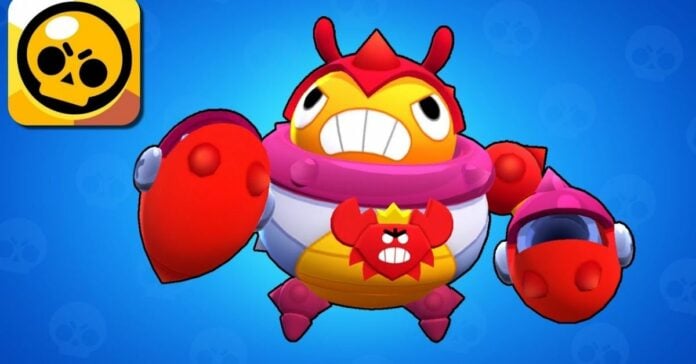 Tick ​​is one of the most powerful warriors. This character came to the arena with his own story. Once the hero participated in the uprising of robots, but Pam saved a mechanical warrior with a good heart and brought Brawl Stars to the world.

The character decided to try himself in a friendly battle. The main weapon of the robot was small grenades, capable of covering a long distance and inflicting significant damage to opponents. With a powerful attack, Tick has become the most popular thrower in the arena.

The smiling robot was added to the list of heroes on June 26, 2019. During the year, the brawler did not have a single costume. On June 27, 2020, the developers announced the appearance of the King Crab Tick skin. In the same period, the first photos, arts, and pictures of the outfit appeared. The costume was put up for sale in the Bravo Stars game store on July 16, 2020.

The outfit completely transforms the smiling robot. Its round body takes on a silvery hue, and its metal head becomes gold.

On the chest of the brawler is a badge with the image of a red angry crab. The oval arms are replaced by red pincers.

The hero’s head is adorned with a red hat. Emotions on the fighter’s face change as well. The robot stops smiling and looks aggressive, ready to fight any opponent.

RELATED: How to Get Many Trophies in Brawl Stars

The animation after activating the skin remains almost unchanged.

The robot moves around the map in the same funny way: its limbs, head, and torso swing in different directions.

The type of shells is changing. Instead of bombs, the King Crab throws red mines with sharp spikes.

The sound effects remain the same. Unlike many other brawlers, Tick does not have his own sound. But his movements and attacks are accompanied by mechanical sounds, ringing, and unintelligible speech. These effects do not allow you to forget that a robot from the future entered the arena.

The Cost of the Skin in the Game

King Crab Tick was received by all users who have collected 4000 trophies. The Crab skin can be purchased in the in-game store for 80 crystals. And it is not always being sold. If you need this outfit, it is better to monitor the store’s assortment every day.

Have you already got a skin? Does the brawler’s clothing matter to you?