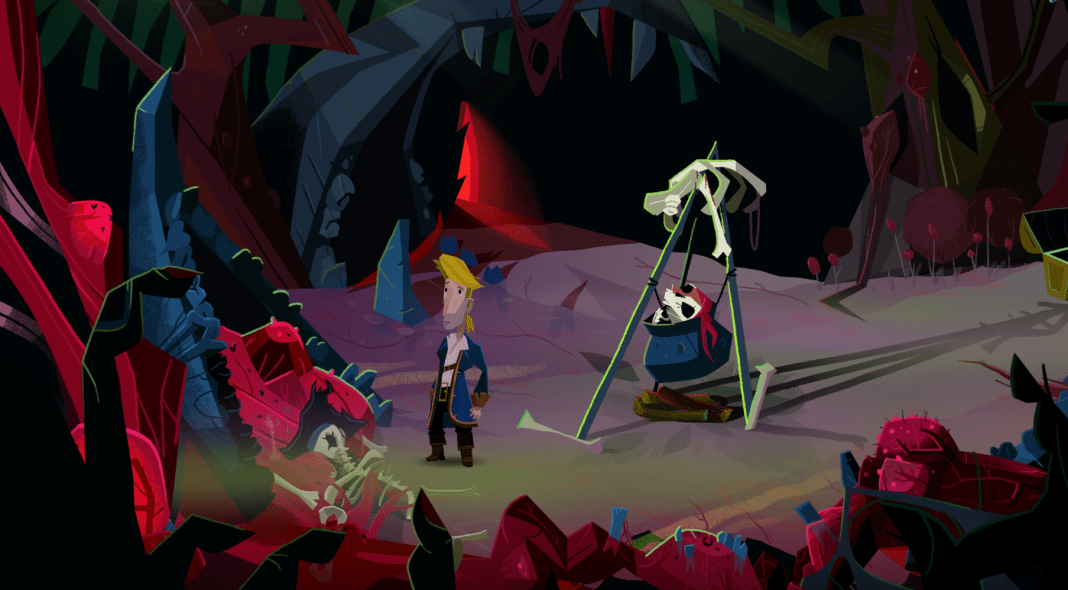 Related | Does Return to Monkey Island have Controller Support? – Answered

So if you have been finding it hard to answer some of the Trivia Card questions, you can check out the below answers. For a quick search, press CTRL + F, search the first few words of the question, and then hit Enter key, which will take you to the question and its respective answer.

With that being out of the way, here are all the Trivia Book questions and their answers in Return to Monkey Island.

2) Which of these is not an island in Monkey Island 2? Reef Island

4) Which of these people were not swallowed by a giant manatee? The Marquis De Singe

5) Captain Kate Capsize… Was wrongly imprisoned on trumped up charges

6) In the back of the Scumm Bar is… The kitchen

8) Who is the local expert on LOOM? Cobb

9) Which of these ingredients is not needed to get to Monkey Island? Yeast

11) The Melee Island Circus was run by: The Fettucini Brothers

12) In Monkey Island 2, who had a glass bottom ship? Kate Capsize

13) Scurvy Island is famous for: Limes

14) What word is the curator asking for when solving the crossword puzzle? Pirate

15) The Voodoo Lady’s name is: Corina

16) Which of these ingredients is not required to make a voodoo doll? Something of the Bread

17) The Mad Monkey was… A sunken ship

20) Guybrush often tries to distract people with the following: Look behind you, a three headed monkey!

24) How many pirates are in the Scumm Bar at the beginning? Eight

25) How many dead pirates are in the abandoned camp on Terror Island? Three

26) Below the cliff on Monkey Island is: Pain, only pain

28) The original Monkey Island was first released on: IBM PC

29) The development of the original Monkey Island took… 9 months

30) The first game to use the SCUMM system: Maniac Mansion

31) What bird is on the crest of Brrr Muda? Parrot

32) The volcano on Monkey Island is filled with… Water

33) The Brrr Muda customs form has how many questions? 33

34) The name of the sheriff in Monkey Island 1 was: Shinetop

35) The parrot on the Brrr Muda seal is holding… Swords

38) Blood Island is home to: The Goodsoup Hotel

39) How many fish are in the fish school underneath LeChuck’s ship when it’s anchored? Eleven

40) How long can Guybrush hold his breath under water in this game? 8 minutes

41) At the end of Monkey Island 1, LeChuck was defeated with: Root beer

43) Production for Monkey Island 2 happened at: A Building

44) How many named books are there in the Mansion bookshelf? Seven

45) What is carved into a tree on the beach on Monkey Island? “L+E”

46) How many windows are lit on the governor’s mansion? Eighteen

47) In the Scurvydog Shack, there is a giant… Fly

48) Flags on the midway are… Red and yellow

49) Flowers by the bench are… Purple

50) How long does it take to walk to Monkey Island? 6 minutes

51) How many mop trees are there? Two

52) The crate in the hold has what on the front? Cross

53) The acronym for the Marley scurvy foundation is: STAPL

54) Which of the following cannot be bought in the Scurvydog Shack? Steamin’ Weenies

55) Which of the following books cannot be found on Carla’s bookshelf? “Piracy for Dummies”

57) Dee rambles on and on about: Anchors

58) Which is a genuine skull name? Do-rothy

59) Which of these cannot be found on the ocean floor? A whale bone

60) Who is the editor of the Pirate Times? Conrad Lee

61) Whose wedding veil can be found in LeChuck’s cabin? Elaine’s

62) In what room is the ground constantly swirling? LeChuck’s cabin

63) What does Guybrush say when landing at an island? Nothing

64) How many different geckos can you spot at the Monkey Island Head location? Eight

65) What does the sign at the Monkey Head location say? “Private Property”

66) The ghost chicken with digestive trouble is called: Molly

68) What’s the first rule of Melee jail? No escaping

69) How many torches are initially burning on Brrr Muda? Ten

70) What far sea creature can be seen swimming below from the LeShip’s crow’s nest? Shark

71) How many hermit crabs have made their home on Barebones Island? Two

72) The coat of arms on the Brrr Muda Ice Castle features the following: A sword and two fish

73) The bird on the Scurvy Island beach is a: Scarlet plumed point and snip bird

74) What animal is featured on Bella Fisher’s ship? A dog

75) What is the name of the roguish pirate in Herman’s favorite book? Reginald

76) How many crows are in the LeShip’s crow’s nest? Zero

77) What ocean species cannot be found in the fish shop on Melee? Squid

79) Due to an outbreak of scurvy, all ships heading north of Scurvy Island are required to carry: Limes

81) What does the Terror Island gate sign say? XYZZY

82) Where is Cogg Island located? J.11 (note: may be different coordinates in different games, but only one answer is coordinates)

83) How many parrots are next to the Scurvydog Shack? One

84) How many ship masts can be seen in the street with the sleeping pirate? Three

85) The Scurvydog vendor… Is near-sighted

86) What does Guybrush specifically dislike? Mushrooms

87) What is next to a dead end on Terror Island? A leaning tree

88) Where can you find brambles? Terror Island

89) How many skeletons are in the water on the Terror Island beach? Two

90) What cannot be found on the sea floor? An old diving suit

91) Which of these not in the park: Seesaw

93) What are the most stone monkeys found in the first ring? Four

94) How many stone monkeys are in the second ring? Three

95) How many stone monkeys are in the third ring? Three

98) How many hot air balloons can be seen from the park? Two

99) The couple in the park are feeding a… Duck

Here are some other guides on Return to Monkey Island:

Return to Monkey Island is available on the Nintendo Switch, PC, and macOS platforms. 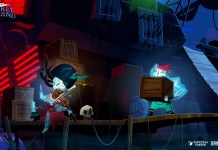 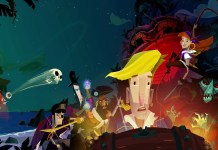 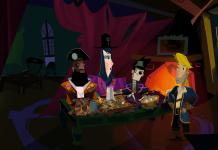 How to Change Controls in Return to Monkey Island: Rebind Keys Guide