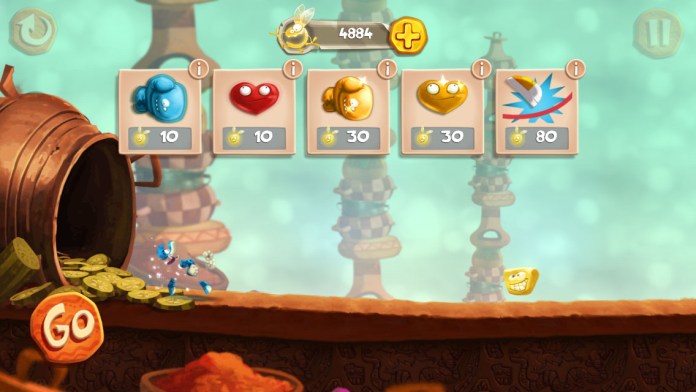 Rayman Fiesta Run is the second game released on iOS devices starring Rayman, one of the most iconic characters created by Ubisoft. The first mobile game, Rayman Jungle Run, was an incredibly fun game thanks to its simple yet engaging formula, where Rayman had to travel through some dangerous worlds, collecting Lums in the process.

As obvious as it may sound, Rayman Fiesta Run is basically the same game. Not that it’s a bad thing, considering how fun the whole experience is.

In Rayman Fiesta Run Rayman will be moving along the stage automatically. All players can do is tell him when to jump, grab a wine and more. The game is controlled with simple taps and it’s really easy to just pick up and play.

Rayman Fiesta Run isn’t a simple rehash of the old game though, as it includes a few new features that fans of Jungle Run will surely appreciate. All the stages found in the game have all new backgrounds which are quite beautiful to look at. You’ll find yourself traveling through some sweets themed stages, as well through some carnival stages, kitchens and more. There’s quite a lot of variety here.

Another new addition to Rayman Fiesta Run are boss stages, where you’ll be chased by bosses through some special stages. They’re nothing too hard, but they help in making the game a bit more difficult and exciting.

Rayman Fiesta Run isn’t a hard game at all. If you want to breeze through the game, you will be able to so without even having to play a single stage more than once. Collecting all 100 Lums in each stage is a different story though. To be able to so, you will have to memorize each stage’s layout and play through them multiple times.

Collecting all the Lums comes with some benefits, of course, as you will unlock a harder remix of each stage. The layout of remix stages is the same as regular ones, but monsters and dangers will be increased while some platforms will be completely removed. The remixed stages help increasing the difficulty of the game and make it an even more compelling experience for those looking for a challenge.

For the regular gamer, Rayman Fiesta Run is a slightly harder game than its predecessor. Luckily, you will be able to buy some special boosts with the Lums you collect to help you through the stages. These boosts include hearts, flying punches and a line that will guide you to get every Lum in a stage. Using boosts alters the game balance quite a bit but, being completely optional, they don’t impact the game too much.

Rayman Fiesta Run is a really fun game that doesn’t stray too far its predecessor. The game, however, features enough new elements that both fans of the first game and newcomers will surely enjoy. What matters in the end is that games are fun and Rayman Fiesta Run definitely delivers in this regard.