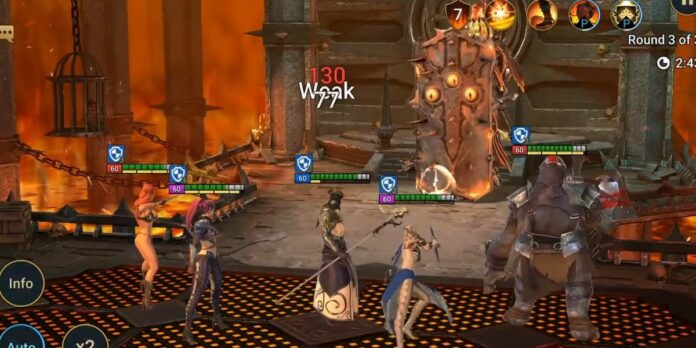 There are a total of 25 stages in the Fire Knight’s Castle, and at the end of each stage, you will fight the Fire Knight himself, Fyro. He starts off strong, but the further you advance into the castle, the stronger he gets, so beware!

The first and most important thing we need to talk about is Fyro’s passive, Cloak of Flames. Every turn, Fyro gains a shield that drastically reduces the amount of damage he receives, in addition to rendering him immune to debuffs. Every hit Fyro takes lowers the shield count by one, and once it hits zero, he loses his buffs and is vulnerable to attack. The key to beating Fire Knight’s Castle is to have a reliable way of breaking Fyro’s shield quickly. The shield counts each individual attack as a single attack, so Champions that hit multiple times are good picks.

At the start of every turn, if you didn’t break Fyro’s shield the previous turn, he will retaliate with a nasty attack called Searing Storm. This attack hits the whole party and decreases their maximum HP. The strength of this attack is equal to the number of hits left in his shield, so although you should always aim to break it, lowering it a lot can help you survive.

Fyro’s other attack is Dazzling Flames, which also attacks the entire party and decreases their SPD for three turns. He can use this attack every five turns, so it’s important to have a SPD buff for your team to counter it.

The number of hits needed to take down Fyro’s shield increases as you advance through the castle. The exact numbers are:

Although Cloak of Flames requires you to play a certain way, Fyro has a few different strategies you can employ. In general, the most helpful buffs for this fight are Increase Speed and Increase/Decrease Turn Meter. Reflect Damage and Counterattack are also helpful for breaking the shield faster. Crowd control abilities can also help your party deal with the regular enemies.

For Champions, there are a few standouts. Stag Knight’s multi-hitting Spot Quarry is extremely helpful for the SPD debuff. Soulbond Bowyer can empty out Fyro’s Turn Meter with Soulbound Shot. Coldheart can attack multiple times with her Flurry of Arrows, alongside depleting Turn Meter with Heartseeker. Zavia, Alure, Fodbor the Bard, and Brakus the Shifter are also all great choices, among others.

So, to recap, you’ll want Champions that can attack multiple times to break Fyro’s shield as soon as possible. Once his shield is down, hit him with hard attacks and debuffs that delay his turn. With the right setup and strategy, you should be able to take the Fire Knight down!

That concludes our guide on Raid Shadow Legends’ Fire Knight’s Castle. If you have any other recommended Champions or strategies, share in the comments below!