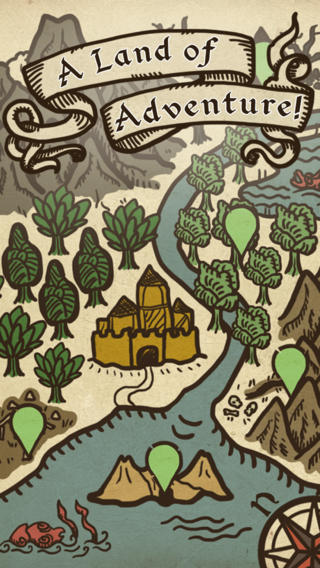 Among the many unique game types available on the App Store, the puzzle/ role playing games hybrids are certain among the most interesting types. No one probably thought two so different genres could be meshed together in an interesting way but several developers have proven many gamers wrong.

A new game like these is now available for download on the App Store. The game has been developed by a former Bullfrog developer called Alex Trower.

Glyph Quest is a fairly typical role playing game, as far as presentation and setting are concerned. Expect to fight several different types of enemies as you explore a medieval fantasy world with forests, villages, castles, caves, dungeons and more.

What sets Glyph Quest apart is its battle system. In order to win each of the game’s battles you will have to match some glyphs to cast some powerful magical spells. The more glyphs you manage to match, the more powerful your spells will be.

The battle system also has some strategic elements that make it somewhat deeper. Not all spell types will be effective against certain enemy types, forcing gamers to discover which spells are most effective against certain enemies. The game also has an interesting reversal bonus system which gives gamers bonuses if an enemy is hit with the opposite element of their previous spell.

Glyph Quest is not a game that tries to break new grounds, that’s for sure, but offers a really solid experience that both rpg and puzzle games fans will surely enjoy.

Glyph Quest is now available on the App Store.