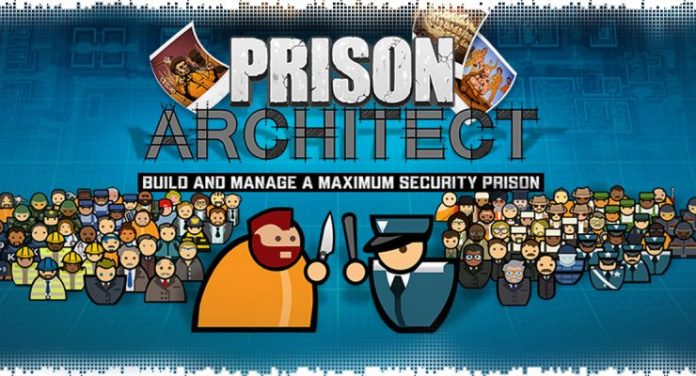 From layout to execution (literally, in some cases), you are the architect, the warden, and the enforcer.

When I first booted up Prison Architect: Mobile, I was half expecting an offbeat general satire of the overall incarceration system. What I was not expecting was a completely serious game about the tragedies that befall these prisoners. Don’t let the simplistic, almost cute character designs fool you – this is a game about crime and punishment and the complete lack of any gray morality. You have only one job, and that’s to run an efficient prison. How you do it, is completely up to you.

Prison Architect: Mobile can be best described as a simulator/construction game. The main campaign, while short, is designed mainly to ease you into the game so you know what you’re doing before you build your own prison from the ground up. There is a LOT of stuff happening at once when you’re running your prison, so you’ll need to know how to control things exactly to your liking. The campaign opens with a pre-built prison. You are currently under the supervision of a prisoner on death row, and it’s almost time for the inevitable. 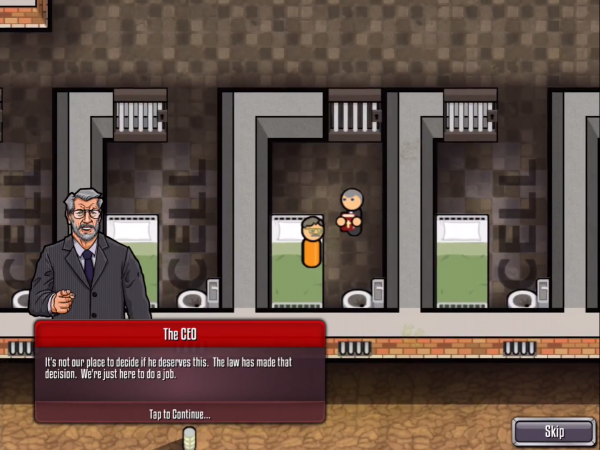 This opening act is where Prison Architect: Mobile solidifies it’s no-nonsense tone. You find out that the man on death row was convicted of the murder of two people. The game presents its story in the form of polaroids, and its a unique way of doing it. The art style in the polaroids is vastly different from the game’s overall art style. It’s something you’d find in a serious comic book. The polaroids tell the story of how the man came home to find his wife cheating on him with another man. As you can probably guess, he doesn’t react to well and the rest is history.

What I really enjoyed about this part was that afterwards you see the man completely broken. Okay, I’m not evil, but there’s a scene where he goes to confess at a church, which follows his arrest. At this point you’ve finished building the execution chamber and the man took his last outdoor walk. The chief contacts you and says not to shed a single tear for the guy. What’s done is done, and it’s not the prison staff’s place to call judgment. You’re only here to do your job. From there, it’s clear that you’re going to be questioning the very idea of morality. 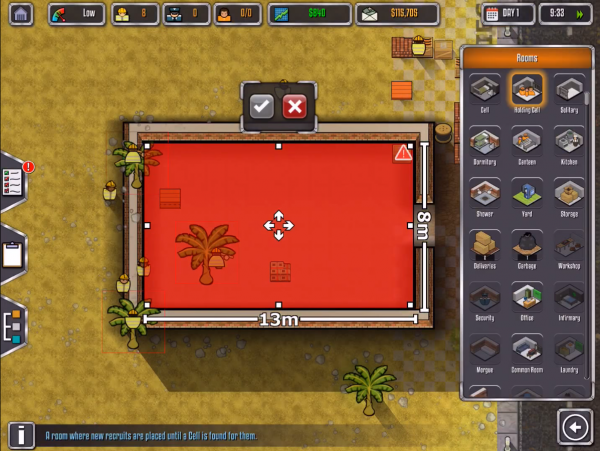 Once you’re done with the campaign, you can take up the job of building your own prison from the ground up. If you took elements from both SimCity and The Sims, threw in a ton of variables, you’d end up with the general flow of Prison Architect: Mobile. To start off, you’ll obviously need some jail cells and facilities. You have to lay down the walls first, then designate that building as a certain facility. Each facility comes with furniture requirements, and the building won’t be counted as a proper facility until you furnish it correctly. There’s something very satisfying about building your own prison – as weird as that sounds.

The game really tries to nail down the “it’s your job and you get to do it however you like” feeling pretty early on with that campaign opening. You can decide how you want to treat your prisoners, and this will actively affect the outcome of their lives. If you’re diligent and attentive, you can keep your prisoners under control and happy – as much as they can be, at least. Clicking on any prisoner – and we mean ANY prisoner – brings up a detailed report of what they did to end up in prison and how they’re currently feeling about the prison. 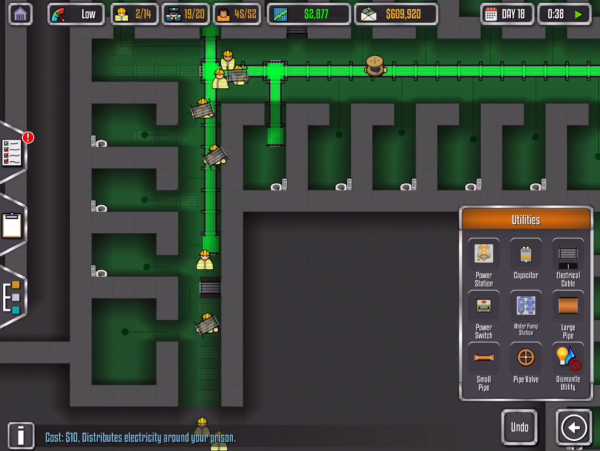 If you want an overview of how every single prisoner feels about the prison, this is where the Reports come in. The Reports lists bar graphs that show the needs of the prisoners, like food, boredom, hygiene, and so forth. Neglecting these needs, while a valid choice, runs the risk of annoying and angering your prisoners to the point where they get unruly. If left in this state for too long, prisoners will begin to revolt and eventually start a riot in your prison, which is something you obviously do not want. Of course, you can always call in the armed guard to take down prisoners by force.

The sheer freedom of operating the prison how you want is astonishing at times but lots and lots of fun. We’re big softies so we tried to make the prison as pleasant as it can be, and even started programs to help certain prisoners with alcohol and drug issues. It actually feels really nice when you see that you’ve helped a prisoner overcome their problems and are eventually let go.

Prison Architect: Mobile is an amazing game in its current state, but unfortunately there are a couple of bugs skittering around. There were several times where the UI would just “stick” and we wouldn’t be able to do anything, effectively soft-locking the game. The game seems also slightly unstable, as we encountered a couple of crashes. That being said, Prison Architect: Mobile is a fascinating and thoroughly enjoyable game. The crime drama sequences of the campaign, the vast freedom you get when building your prison, and the layers and layers of management complexity all add up to a very engaging experience.