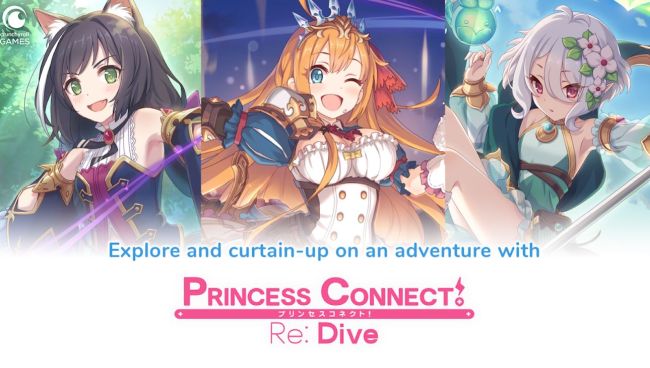 In today’s article we are going to take a look at some Priconne R beginner tips and tricks, to help you get started into the game and set you on the path of success. While there are so many hardcore Priconne R players, you don’t have to be like that if you just want to casually enjoy the game.

These Princess Connect Re: Dive tips are great no matter how you choose to play, because they cover some of the most important elements of the game (and how you should approach them). So without further ado, let’s dive right in!

Spend all the Stamina you can to progress

When you’re just starting off, you will have a seemingly low Stamina pool – however, as you level up your account you’ll see that it will also increase. At the very beginning it’s best if you try and progress as much as you can with your current units, because you’ll get much better rewards in the later stages.

At one point you’ll even run out of the free Stamina and you’ll have to spend Jewels to renew it. It’s perfectly okay to do so, since you’ll get all the Jewels back eventually, and the sooner you progress (stage-wise), the better. The main reason is because then you can farm specific shards in Hard mode and upgrade your units quicker.

There are plenty of ways to upgrade your characters in the game and get stronger, and you should always have that in mind, no matter what you do. For example, your heroes will get stronger when you upgrade their level. They will also improve once you start equipping gear on them and ranking them up.

Focus on upgrading your player level

This step is extremely important (especially at the start), because it will increase the maximum Stamina you can hold, and not only. The level of your characters is determined by your player level, so you want to make sure that you advance quickly if you want to have an easier time progressing.

The best way to upgrade your player level is by doing the quest missions, especially your Daily Quests. These will give you player level EXP steadily every day, so make sure you do every single one of them, daily.

Rank up your characters

For a more detailed guide on ranking up your characters, make sure you check our guide on how to rank up heroes fast. That will shed some light on everything that you should do in the game to rank up faster and acquire lots of gear pieces.

Don’t forget to gear up your most-used units

The characters that you use the most should be the ones that get your best gear. It’s important to gear them up because they get extra stats, which are going to make passing through the stages a breeze!

Note: Do not refine the gear! Just equip them, and don’t spend any Mana and other resources on refining – it’s not worth it!

Save up all the Mana!

Since I mentioned that you shouldn’t spend any Mana on refining gear, I mean it – you should really save it up and upgrade your heroes with it, since leveling up the Skills and many more will cost a ton of Mana. Depending on how fast (or slow) you progress, you should just save up Mana and spend it later.

Focus on a few good carries

Although some people prefer to upgrade all the units, I always prefer to go for a few specific ones. I suggest leveling up a couple of Tanks (Magic tank and Physical tank), a few Magic, and a few Physical damage dealers, and of course, you can always go for a healer or two (even if they won’t be that great at the start).

Depending on the stage or instance you’re trying to clear, you will have to swap between the units, which is why it’s good to have a few select units that are ahead. I don’t recommend leveling up ALL the units at the start, since you want to make sure that you upgrade the ones you rely on the most first. If you’re not sure which ones these should be, then check out our Priconne R tier list!

Join a good and active Clan

I can’t stress just how important it is to join an active Clan. There are some clan-specific instances (such as Clan Battle) that are really important if you are a social person and want to progress quicker.

Basically, in the Clan Battle is an instance where you need to team up with the other Clan members and fight bosses in a specific way. Makoto is one of the greatest units for this, so make sure you upgrade her for this reason alone (if nothing else).

Ace every stage in the Story Mode

At the beginning you will probably not be able to clear every single stage with 3* – that’s perfectly fine, since you won’t really have some super powerful units at the beginning. If you struggle to get past a stage, just try to clear it however you can and move on.

It’s important to progress and clear the level with 1* (at least) so you can unlock the one-time rewards and equipment that might drop. Then, once you upgraded your units and made them a little stronger, you can come back and re-play that level to clear it with a clean 3*.

The reason why it’s important to ace every stage is because there is a 3* clear reward (one-time-claim) that gives you Jewels. That’s going to be one free way to save up some Jewels and use them in the Gacha later on.

Adjust your team depending on what enemy you’re fighting

This has happened to me at the very beginning, and I can assure you – it’s extremely annoying. If you don’t adjust your team according to the type of enemy you’re up against, you might end up not passing the stage at all, or barely passing it with 1*.

When you’re having a hard time during story mode, simply tap once on the opponent in the pre-battle interface. There it will show you what type of enemy it is, which position it attacks and how you can best defend against it. For example, against Magic damage enemies you want to add to your team units that have good Magic DEF skills.

That’s the reason why I mention in the very beginning that you should upgrade multiple units – that way you’ll have strong characters to use no matter the situation.

Head on to the Grotto!

The Grotto is extremely important if you want to gather resources. This is the place where you can farm for Mana or EXP for your heroes, so try to clear as many levels as you can (depending on your strength) and once you’ve reached a high enough level (or a level you’re content in clearing over and over again) you can use your skip tickets to quickly clear them.

Clear the Dungeon and farm for Coins

In the Dungeon (next to the Grotto) you will be able to farm for Dungeon Coins, and subsequently character shards. You should try to clear the Dungeon as much as possible, and increase the maximum level you do. The higher the level, the better the rewards.

Once you clear some dungeons, you’ll receive Dungeon Coins that you can later exchange in the Dungeon Shop for character shards. Depending on what units you want, I’d suggest you go for the following:

Don’t be afraid to do the PvP Arena

Even if you don’t have a very good PvP team at the start, you can still try to fight others and get some Arena Coins. Basically that’s the main reason you will do this – unless you want to really rank up and compete with other players in the top (in which case you’ll need to invest quite a lot).

From the Arena Shop you want to spend your Arena Coins on the following units:

From the Princess Arena you want to get the following units first:

For now, these would be all of our Priconne R tips and tricks! Do you have any more beginner suggestions and tips for fellow players? Leave them down in the comments section below!