After being a lifelong Football Manager fan, this year I decided that it’s time to explore other football management games and Thumbstar Games’ Premier Manager for iOS seems like the perfect game to fit the “wanted” ad.

Just like many other gamers out there, I fondly remember Premier Manager 98 – a fun, fast paced football management game for the PC and one of the first to show actual gameplay thanks to its match engine, in a text-based era. To be honest, I haven’t really heard much about Premier Manager following the ’98 version, so you can imagine how happy I was to hear that the boys are back in town. Hopefully bigger and better than ever.

I won’t lie and tell you that I remember everything Premier Manager 98 and write this Premier Manager review of the iOS game (tested on an iPad 3, by the way) as a comparison to the oldie but goldie. Instead, I will focus on what makes this football management sim such a great game and the few things that I found frustrating.

For those who played for years nothing else but Football Manager, the first few moments in the company of Premier Manager will be awkward: you’ll have trouble navigating through the menus and finding your way through things, but after just a few minutes you’ll see that Thumbstar’s approach is clean, makes a ton of sense and gives you no reasons to complain: just a few taps away there are options to change tactics, scout for new players, check out your team and set up the training, among other things. 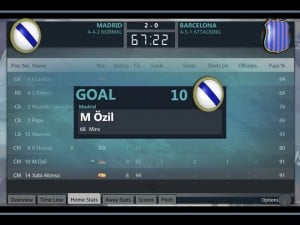 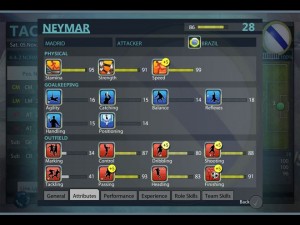 As a manager of the club of your choice, you will spend a lot of time, especially at the beginning of the game, checking out your squad and coming up with the perfect tactic. In the tactics screen, you have a nice indicator of the overall ability of your player – a bar that allows you to select the best players for the first 11 without actually caring about their personal stats. Of course, no real manager does that, and Thumbstar give you the chance to actually see all the attributes of each player if you double tap their name. The attributes are nicely arranged by category – Physical, Goalkeeping and Outfield and you can also check out a player’s progress through that menu, including other stats.

What I liked a lot about Premier Manager’s approach to the game is the existence of Team Skills, with each player having their own level at a multitude of skills, like closing down, zonal marking, through balls and so on. There’s also the team unity element that comes into play, and your goal is to have this level as high as possible for the team to perform at maximum levels. The unity is influenced by a few factors, like having players in their preferred position on the pitch or having them at the club for a long time. These are two really interesting elements and even though I didn’t have the chance to understand how much do they impact the game, they certainly matter!

Finding new players in Premier Manager seems to be done more realistically than in Football Manager. You have two actual options to find new players: either by performing a Player Search or by assigning scouts to specific countries, clubs or simply by sending them on an international hunt. Now, performing a player search means that you can only select the position you’re interested in, plus some extra goodies like value, nationality or age if you want to. No “passing is at least 15” that makes things a lot easier in getting the superstars. Here you have to scout every player if you want to know their attributes and this, as I said, makes things look and feel more realistic. 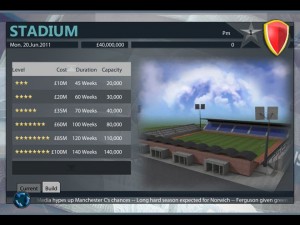 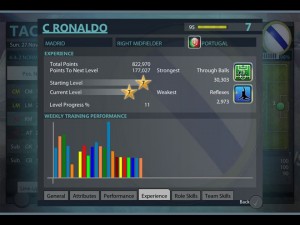 The match engine is, unfortunately, the biggest problem of Premier Manager and it’s quite disappointing. For a game that back in 98 had a nice looking match engine, you’d be expecting a lot more 15 years later. Instead, we get a top down view of the pitch, with the ball extremely difficult to follow and up to a point, even difficult to separate your own players from the opposition, especially if their jerseys have similar colors.

Even worse as a choice and really surprising to me is the fact that you have no options to boost things a little bit: you are forced to see the entire match and there are just two speeds available: normal, which is painfully slow for an unspectacular, hard to follow game; and fast which makes the game impossible to watch and follow. Having the option to watch only the key moments would’ve made a lot more sense, as it would’ve made switching to text only, getting an instant result or ANY kind of option. Instead, we’re forced to either watch the whole match or fast forward it and never understand anything from it.

It is so bad to have to say this, but this entire match engine thing basically shadows all the great things that Premier Manager accomplishes. I actually consider this game superior to Football Manager Handheld up to the point of actually getting to the field and watching your team play. I think that the best way to describe this game is like that delicious meal you have where you save the last bite to be the most delicious of them all, only to find that there’s a fly in the gravy. Which is disappointing, but at least you still have the good taste of the bites you had earlier.

So would I recommend Premier Manager? It certainly is worth trying out if you’re ready to get past the match engine problem, fast forward the games and focus on building your team for the greater glory. If watching your team in action is extremely important for you, prepare to be a disappointed! But consider this: there were times when we had nothing but text to describe the flow of the game, and that worked out just fine!