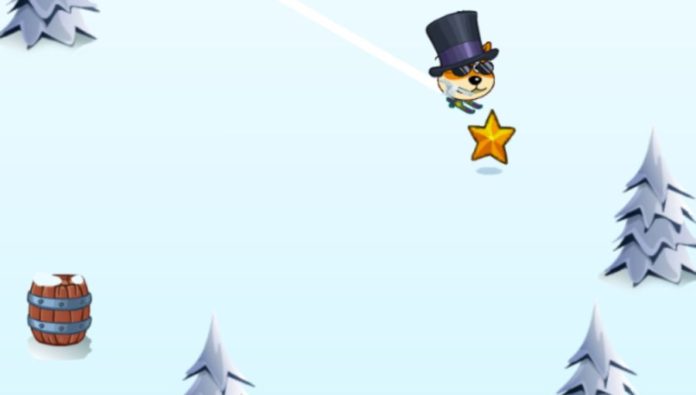 Like Temple Run before it, Powder Hound is an accessible, cartoony, one thumb mobile game in which you’re being chased.

In this case the pursuer is a snowball machine under the control of a haywire AI called Dred, and the quarry is you, a cheerful skiing dog called Rocket.

Powder Hound has a very simple gameplay concept. Rocket the dog skis down the hill automatically in a diagonal line. Whenever you tap the screen the line flips, left to right, right to left. 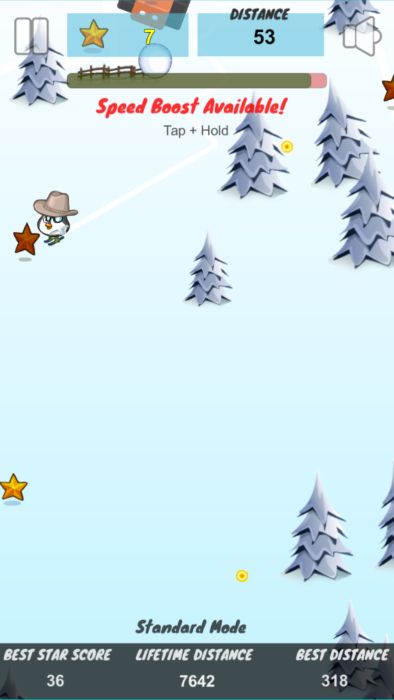 This simple input mechanic gives you a surprising amount of control. Tapping at varying speeds on the screen lets you descend at any angle, and with practice you’ll be weaving through the trees like a slalom pro.

Each time you tap the screen to change direction you use up a bit of energy, and you replenish this by collecting gold stars. Bronze stars, meanwhile, give you a speed boost, which you can activate by holding your finger down.

It’s not always sensible to activate this boost, however, since Rocket is that much harder to control when he’s going extra fast.

And crazy speed isn’t the only thing Rocket has to worry about. There’s also the question of those pesky snowballs, which criss-cross the screen and wipe the hapless dog out if he collides with one of them. 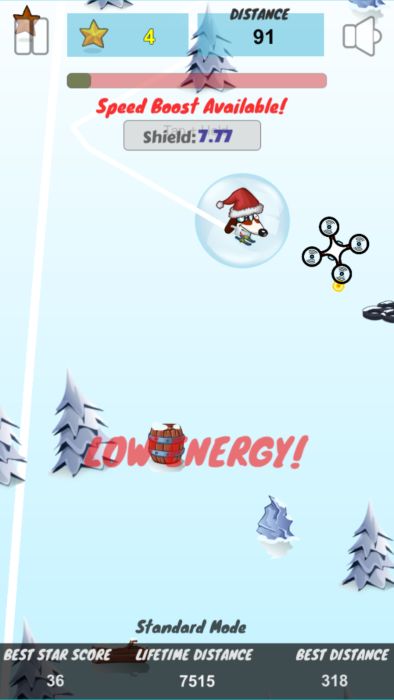 Trees, other objects, and even the edges of the screen have the same effect, making Powder Hound: Snowball Madness a seriously challenging game.

There’s nothing wrong with a challenge, of course, and skilled gamers will relish the difficulty level.

However, not all of the difficult elements are welcome. The collision detection takes some getting used to, and doesn’t always feel fair, leading to avoidable collisions and missed stars.

While we’re talking criticisms, the pop-up ads that appear after every few games are pretty annoying, though you can banish them by forking out $1.99 for the ad-free game. 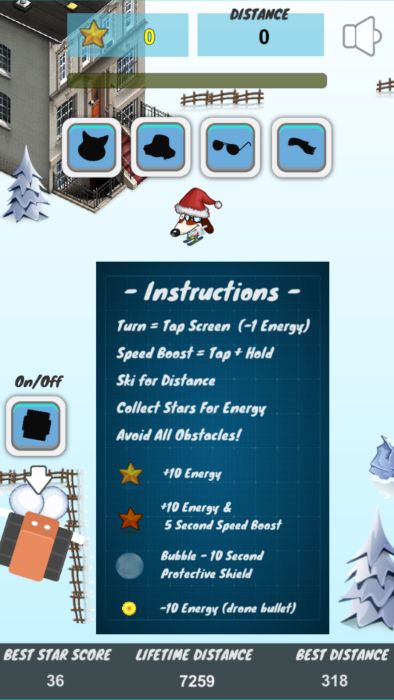 Power Hound isn’t the most sophisticated-looking mobile game on the market, but its simple cartoony graphics fit well with the casual nature of the gameplay. Rocket crams a surprising amount of character into his small frame, and the channels left by snowballs and skis are a nice visual flourish. You can even see a bird crossing the screen from time to time.

If the idea of a controlling a dog doesn’t tickle your fancy you can swap Rocket out for a panda, a cat, or a penguin in the main menu, and you can dress your skier in a variety of hats, glasses, and scarves. There’s scope for a lot more in the way of unlockable content in the future, but it nice to be able to tinker with your character from the off.

Along with these cosmetic changes you can mix up the gameplay with Casual mode, which dispenses with snowballs to give you an easier run. This mode has its own leaderboard and achievements.

It’s not clear why Dred is so determined to wipe out Rocket, but who really cares? What matters is that Power Hound is a simple but solid casual game that will give you a pretty stiff challenge. You can give it a try by downloading Powder Hound: Snowball Madness on iOS and Android now.