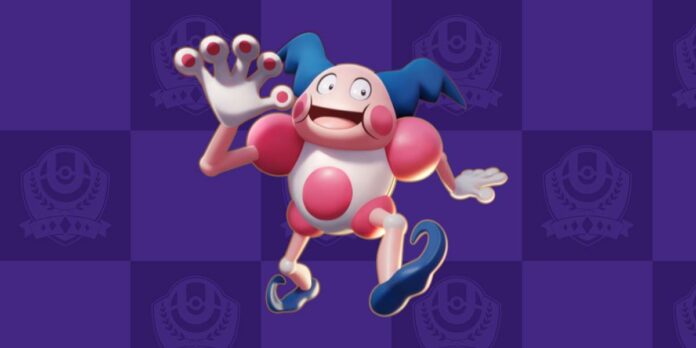 Mr. Mime, the enigmatic and dashing psychic Pokémon, is here in Pokémon Unite! Mr. Mime has always been an interesting Pokémon with an even more interesting move set, and that is exemplified in Pokémon Unite. With some area-denying abilities and surprisingly strong blasts, Mr. Mime can support its team to victory. We’ve got the strategies you need here in our Pokémon Unite Mr. Mime build guide for the best moves, items, and more!

How to get Mr. Mime in Pokémon Unite

Mr. Mime can be acquired from the Unite Battle Committee for either 8,000 Aeos Coins or 460 Aeos Gems. Unfortunately, as of now, there are no events that reward you with Mr. Mime’s unite license for free, though that may change in the future. Be sure to keep an eye out for upcoming events!

Mr. Mime is a melee supporter who has incredible crowd controlling abilities, thanks to its high amount of displacement and stun move set. Mr. Mime is a bit challenging to play as due to its uniqueness from the other support Pokémon, but mastery of its move set will allow you to control the battlefield to your team’s will. Mr. Mime’s passive Filter reduces damage received after it uses a move, and its 3rd basic attack will throw enemies. Chain basic attacks with moves to create an obstacle course that your enemies must navigate.

Mr. Mime’s first basic move is Fake Out, a quick clap in front of Mr. Mime that deals damage and shoves enemies. Fake Out is usually your first move pick, as it will be your only offensive move for a while. This move morphs into Confusion or Psychic.

Confusion shoots out a blast of psychic energy in a targeted direction, dealing damage and shoving enemies. Enemies shoved into obstacles like walls by this move will be stunned, leaving them unable to act. Hitting a guard-swapped enemy increases the damage and will not shove them, but stun them in place.

Psychic unleashes a blast of telekinetic energy on potentially three different targets: one blast on Mr. Mime, another blast on any guard-swapped enemies, and a final blast on any Light Screens or Barriers lying around. Psychic damages enemies and lowers their special defense temporarily. Enemies hit by overlapping Psychic blasts will be stunned.

Light Screen is Mr. Mime’s second basic move, and it creates a wall of light that prevents enemies from passing through. You can use this to deny important areas from enemies or save teammates from doom. This move morphs into Barrier or Guard Swap.

Barrier is basically an upgraded version of Light Screen, with the only change being that you can now use it multiple times before it cools down. Its upgraded version increases the amount of stacks you can hold of it, enabling you to create essentially a wall!

Guard Swap shoots out a linking beam and if it connects with a target, Mr. Mime will temporarily swap its defense and special defense with the target. If the beam hits an enemy, they will take damage over time and are slowed, while speeding up Mr. Mime. If the beam hits an ally, both Mr. Mime and the ally’s movement speeds are increased.

Mr. Mime’s Showtime unite move jumps to the targeted location, dealing damage over time to enemies caught in his performance radius. Enemies are stunned during the show, so your team is free to take ’em out. Use this move when most of the enemy team is clumped together, as expert players will try to watch out for this unite move and stay away. If you can’t catch them, they might retaliate with a stun or displacement, which will end the performance early.

Confusion / Guard Swap — Mr. Mime’s go-to build for direct damage and support. Guard Swap an enemy, then blast them with Confusion to stun them on the spot for your allies to move in for the kill. Confusion also does a surprisingly high amount of damage when chained with Guard Swap, so you can keep opponents on their toes thinking you’re a free kill!

Confusion / Barrier — Mr. Mime doesn’t have to worry about having no obstacles around when he can create them himself! Mr. Mime becomes a high damage threat when you can create multiple Barriers to set up Confusion stuns, so this is a great build choice when you need to lock down mobile enemies.

Psychic / Guard Swap — The ultimate lockdown build, perfect for enemies that keep coming after you. Advanced players who know how dangerous Mr. Mime can be with its crowd controlling abilities will usually target you first, and this is the ultimate counter play to that strategy. Remember that Psychic unleashes a burst of energy not only around you, but around your guard swapped target as well, as long as it’s an enemy. Enemies who try to rush you down will be in for a nasty surprise when you get close, Guard Swap a central target, and then hit enemies with multiple Psychic blasts, stunning them in the process.

Buddy Barrier is a great held item for Showtime, since Mr. Mime is stationary during the performance. If enemies don’t have a stun or displacement, they’ll have to just focus you down, which Buddy Barrier can help greatly with. It can also help any allies that are diving with you.

Shell Bell/Rocky Helmet/Assault Vest are all great options for helping you stay in the fight longer. Any self-sustain items like these are great for Mr. Mime, especially if you’re trying to use Psychic on guard swapped enemies, as this requires you to get pretty close to danger.

Do you have any other recommended build ideas for Mr. Mime? Let us know in the comments below!