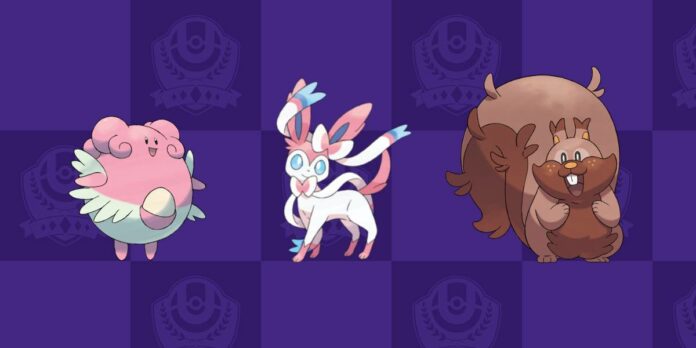 During the alpha testing of Pokémon Unite, some resourceful gamers looked into the game’s data and found out Gardevoir and Blastoise’s data in the files, suggesting that they were going to be future playable characters. Sure enough, shortly after the leaks, they were officially announced to be the first added characters. Gardevoir was added yesterday, with Blastoise coming in the future.

Players are still digging into the game and there’s been another major reveal: the next potential playable Pokémon are going to be Blissey, Sylveon, and Greedent! These are some interesting choices for sure, so what can we expect from these Pokémon?

Blissey is the evolved form of the normal-type egg Pokémon Chansey. You probably know Chansey as the helpful workers at the Pokémon Centers that help out Nurse Joy. Fittingly, Blissey looks like it’s going to be a support character in Pokémon Unite.

Related | How to Reach Trainer Level 13 in Pokemon Unite

Sylveon is the fairy evolved form of Eevee. The leaks aren’t quite sure if there are going to be any other Eevee-lutions yet, but they know for sure that Sylveon is in the game. Sylveon’s basic moves are Swift and Attract. Sylveon could be a special melee attacker.

Swift looks to be a normal damaging skill shot, and it can morph into either Psyshock or Hyper Voice. Attract can temporarily distract enemies, and it morphs into Draining Kiss or Fairy Wind. Draining Kiss may be an upgraded version of Attract, while Fairy Wind may be some kind of support move.

And the final leaked Pokémon is Greedent, the chubby squirrel from the Galar region. Greedent’s basic moves are Thief and Wish. Thief may have some stat stealing properties, and it morphs into Round or Gyro Ball. Wish sounds like it may be a self-support, which morphs into Stuff Cheeks or Belly Drum.

We’re thinking Greedent might be a physical melee attacker due to the amount of physical attack moves it has. Greedent is a fun little guy, and we’re excited to see what other things the dataminers may come across.

The leak also revealed some new customization options, for both trainers and Pokémon. There are some new ears for trainers — Slowpoke and Dratini, to be exact. Blastoise is getting a fancy Holowear, while Pikachu a cute little flower hat with a fancy top to go with it. Slowbro is also getting a slick vest with some goggles, and Alolan Ninetales is getting a Japanese inspired garb. But perhaps the best costume on the way is Snorlax’s berry Holowear, where they’re just one big berry!

Isn’t he just absolutely beautiful? Many of the Holowears that were found in the early tests of the game, like the fancy Charizard, are also still on the way. Be sure to start saving up your tickets so you can get the Holowears you want!

Which parts of the leak are your most anticipated? Let us know in the comments below!