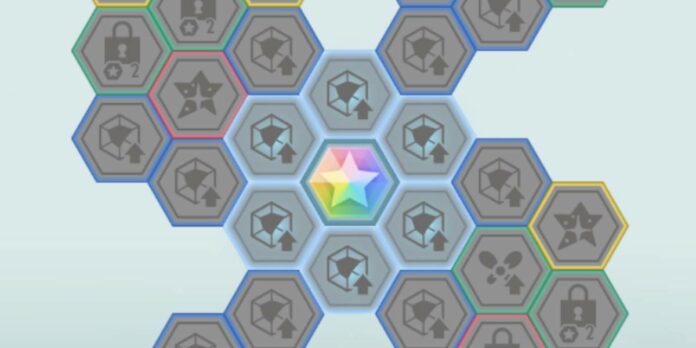 The Sync Grid allows you to further strengthen your Sync Pairs by learning new grid skills. Each grid skill costs energy and Sync Orbs, and you can only learn a skill if you have an adjacent skill already unlocked. Each Sync Pair is allotted 60 energy, with certain grid skills costing different amounts of energy. You won’t be able to acquire every single skill on a Sync Pair’s grid, so you’ll need to plan accordingly. Don’t worry too much, as you can reset your Sync Grid at any time you like.

Sync Orbs are acquired from specific exploration stages and are specific to their Sync Pairs, meaning they’re not interchangeable. One of the easier ways to get them is to farm the daily Training Area.

Sync Grids have all sorts of skills on them — there are grid skills that increase your speed, defense, attack, and some that even augment your existing moves with new abilities.

It’s best to have a “theme” for your Sync Grid, like a build that focuses on increasing your special attack and augmenting your moves, rather than spending your energy on every skill you see. You get four skill sets that you can freely switch between, so feel free to experiment with different builds.

Many Pokémon have a wide variety of grid skills to obtain, giving you a lot of options to build towards your play style. In general, a lot of Pokémon share the same kind of grid skill distribution, so certain strategies can be applied to different Pokémon. You’ll also notice that each skill is color coded, so to help you look for the skills you want, here’s a legend:

All-Rounders are balanced Pokémon that have access to both offensive and utility moves. If you’re ever unsure of which Pokémon to use, All-Rounders are great options because of their versatility. For these builds, you can choose an even amount of stat upgrades, move augmentations, and passive skills. All-Rounder examples include:

Attacker builds focus on powering up a Pokémon’s main damage move while also increasing their attack stat. These builds usually focus on turning the Pokémon into a powerful beast with little to no utility. Building a Pokémon for attacking requires you to get their attack or sp. attack upgrades, move upgrades, and sometimes passives if they help you deal more damage. Attacker examples include:

Supporters are Pokémon that have a lot of utility skills, including moves that restore the Move Gauge and heal/buff their teammates. Support Pokémon are always great to include on your team thanks to their buffs and debuffs, which are huge in Pokémon Masters EX. For Supporter builds, you’ll want to focus on move augmentations (particularly Refresh and MP upgrades) and passives. Supporter examples include:

These are just a few examples of the many builds you can have for your Sync Pairs. Once again, don’t be afraid to experiment — you have four slots for different builds, so go ahead and try new builds out if you’re curious.

Got a favorite build for your favorite Sync Pair, or have any questions about the Sync Grid? Let us know in the comments below!