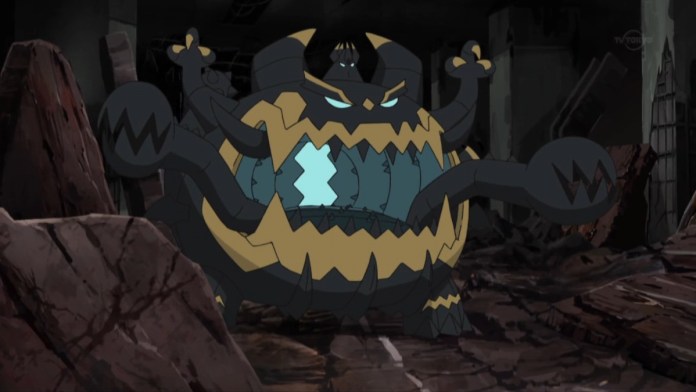 When it comes to Pokemon, you truly can’t get more otherworldly than the Ultra Beasts, the eldritch-like Pokemon originating from another dimension. Guzzlord is a part of this group of twelve and he’s now available in Pokemon Go.

A Dark and Dragon-type, Guzzlord’s appetite never seems to be satisfied no much how much it consumes. It is said that it will eat just about anything that comes close to it and that it is capable of swallowing up large formations with its mouth. It can do the same to your opponents in Pokemon Go if you give it the correct attack pairing. This is the best moveset for Guzzlord in Pokemon Go.

RELATED: How To Catch Gimmighoul in Pokemon Go

One of Guzzlord’s greatest traits is that its typing makes it resistant to several different types. This includes Electric, Grass, Water, Fire, Ghost, Dark, and Psychic-types. In contrast, Guzzlord is weak to Fairy, Fighting, Bug, Ice, and Dragon-types. You’ll want to completely avoid bringing Guzzlord to any boss, gym, or raid with Fairy-types because as a Dark and Dragon-type, it takes double damage from those.

How To Pick The Best Moveset For Guzzlord

When it comes to a game like Pokemon Go with so many battling options, moves will depend. The perk of Guzzlord’s best moveset is that it works for both gym fights and PVP battles. It is an all-purpose DPS set that will work in both an offense and defense set.

All Of Guzzlord’s Moves In Pokemon Go

The best moveset for Guzzlord:

One of the reasons this pairing works so well is because it benefits from the Same Type Attack Bonus, where if a Pokemon has two moves of the same type, they will deal twenty percent more damage.

Other moves Guzzlord can learn:

Guzzlord’s special move buff and his abilities as a straightforward DPS battler make them an excellent addition to any team. You can capture Guzzlord in raids in Pokemon Go today!