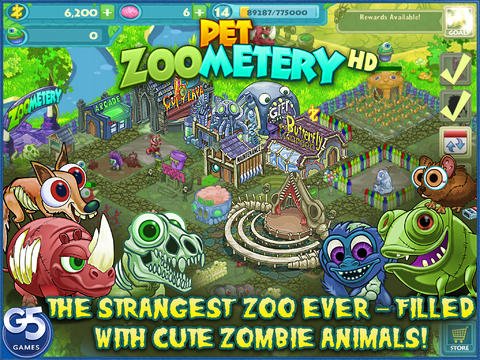 For some reasons, we like to grow things, manage farms and buildings and evolve our little plots of land into bustling attractions for the world. All of these virtually, of course, because it’s easier than it would be in real life. And since we like all this so much, G5 Entertainment decided to give us a chance to build and manage our own zoo… with a twist in Pet Zoometry.

A funny twist I might add, as all the animals are… zombies and we’re not managing a regular zoo, but a zoombie zoo. So expect to see a Lion whose head falls off, some racoons whose eyes fall off and all sorts of funny zoombified animals taken care of by your zombie staff (who, by the way, don’t seem to actually do anything in the game). 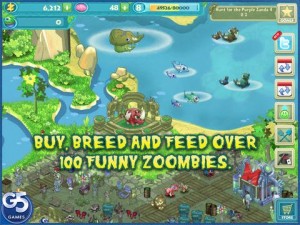 And if base building and time management are not enough for you, there’s a bit of pet simulation too – take the monkey for example, a special zoombie that can learn new tricks and act all adorable in its zoombie state. You can teach it to sit, flip, roll over and, strangely, play dead, record its tricks and do it all over again.

The game also offers a hatching system to give you even more zoo members as well as an extremely fun mutation factory where you can combine different types of zoombies from your zoo for completely new ones. And with over 100 animals to discover, you’re in for a lot of work! Fortunately, it’s the fun and interesting kind of work.

A nice thing about Pet Zoometry is that it doesn’t rely heavily on in app purchases – you can completely enjoy the game even in the later stages without feeling pressured to spend real money on it and I think that this could be considered a real bonus today. 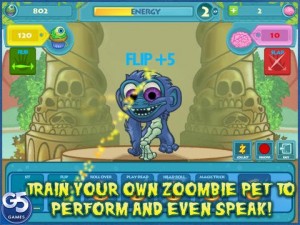 Visually, the game is cartoony and colorful and for whatever reason, it makes me think about The Croods. Either way, it’s a pleasure to look at this game and check out the animals on your zoo jump around and act funny and… even find out a series of really funny Rhino Facts (it appears that the Rhino is some sort of Chuck Norris of the jungle, but you’ll find out more about that when you play the game. 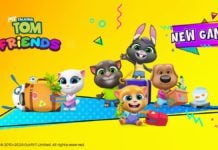