As a Wizard player in Perfect World Mobile, I have put together for the other players a complete Wizard Guide with all the Wizard class skills so that you can have a better understanding of the class and how to master it.

The Wizard is a class which works well from a distance, and deals massive amounts of magic damage. Unlike other classes, the Wizard is not gender locked, so you can choose Male or Female when you are creating your character.

Since you can level up all of the skills, there really isn’t an exact “build” which you should go for, because all of them will come in handy at some point, and if they are leveled, it’s even better because they will be more powerful. Now let’s start taking a look at the Wizard’s skills with their description, starting with the very first ones:

Pyrogram – Creates a fire charm to throw at the enemy target. This works as your basic attack, and it’s a pretty useful skill to max if you want to spend the time between skills normal attacking.

Gush – Creates a powerful water beam that bursts from below the enemy, dealing extra magic damage and slowing the target by 40% for a few seconds. It’s a pretty useful skill, if you want to add some CC to your kit.

Fire Will – Creates a powerful blazing phoenix which attacks multiple enemies in a line and knocks them back. It’s a useful skill for PvP instances.

Hailstorm – Calls down upon a hail of ice blocks which deal magic damage to a single target and to a few of the enemies surrounding it, slowing down the targets by 50%.

Shrink – Teleports the caster forward 10m, and roots the targets within 5 meters for 1.5 seconds. It’s the only “evading” the Wizards have, so use it carefully.

Hill’s Seize – Summons a mountain which falls upon the targeted enemy and the targets nearby the selected enemy. This skill will inflict a powerful Stun effect on enemies which got hit, which lasts 3 seconds.

Dragon’s Breath – Shapes the power of fire into a flame aura with a 4m radius which continuously uses up mana and deals extra magic damage every 0.5s to enemies within the range. It lasts up to 30 seconds, until the mana is completely depleted or until manually cancelled.

Chi Burst – Consumes 1 Spark to empower the caster, increasing their magic attack and turning the caster invulnerable for 1 second.

Will Force – Creates an invisible explosion which inflicts silence and slow on the enemy target and offers the caster a “Stone Barrier” effect, which creates solid armor around the caster, increasing their physical defense by 20% for 30 minutes.

Blade Fury – Throws a lot of blades and flames at the enemy, dealing massive amounts of magic damage to a target and to the enemies within 6.5m from the target.

Heart Sutra – The caster’s next skill within 10 seconds becomes instant and restores 10% of maximum mana. It’s a great skill to pair up with other skills and you can try using this to prolongue the time that you keep Dragon’s Breath aura activated.

Ice Dragon – Spark Skill. Creates an ice dragon which jumps into the air before plunging down upon the enemy dealing a lot of magic damage to the selected target and the enemies within 4m from it, inflicting a powerful 60% slow for 6 seconds.

As you can see, these are all the skills that a Wizard can have. They do not offer a whole lot of crowd control in PvE situations, but in PvP instances the slow can be quite powerful (and annoying if you are the one being slowed).

I would suggest that depending on which battle style you want to go for, you start upgrading all the skills in the order that you can, because they are definitely going to be useful at one point throughout the game.

I personally prefer using Fire Will and Glacial Snare, as well as Chi Burst to further empower the skills that I am using. Even if Dragon’s Breath is a very powerful skill, I don’t really use it that often, unless I am in the middle of a million enemy monsters and I want to take them down all at once.

A big drawback of Dragon’s Breath is that you can’t move while you are casting it, so that’s the main reason why I prefer to not use it, since as I mentioned in the game guide right here, I like to always keep on moving while I am casting the skills, because the Wizard is not the most tankiest of the classes, so I am trying to avoid taking damage.

Make sure you check out our full Perfect World Mobile class guide to take a look at all the classes in the game and select the one which will best fit your play style throughout the game. I have also written there a little bit about why I recommend certain classes for beginners, so if you want to make a change (or even try out the Wizard) check it out!

Would you try out the Wizard? Or maybe you are already a Wizard player in Perfect World Mobile? Let us know down in the comments below which skills are your most used ones and why! 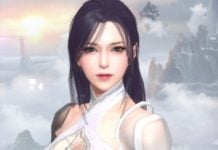 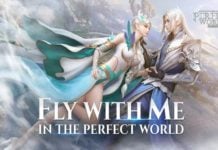 Perfect World Mobile Leveling Guide: How to Level Up Fast 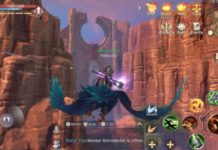